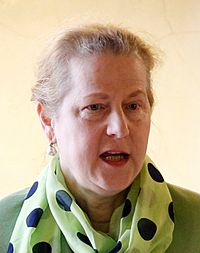 Stix-Hackl was the Austrian Ambassador in the Grand Duchy of Luxembourg between 2007 and 2012. Stix-Hackl was Permanent Representative of Austria to the United Nations (Vienna), IAEA, UNIDO and CTBTO from June 2012 until her death in 2018.

Stix-Hackl died on 24 October 2018 in Vienna from a heart attack at the age of 60, shortly after returning from Luxembourg .

All content from Kiddle encyclopedia articles (including the article images and facts) can be freely used under Attribution-ShareAlike license, unless stated otherwise. Cite this article:
Christine Stix-Hackl Facts for Kids. Kiddle Encyclopedia.