Chudleigh Fort is an ornamental fort in East-the-Water, a suburb of Bideford in Devon in the UK. It stands on the site of a 17th-century earthwork gun platform which was built during the English Civil War. The fortification was reconstructed in stone as a Belvedere in the 19th century. It was given Grade II listed building status in 1949.

The site's original military fort was built for the important Devon landowner Sir George Chudleigh and his son James Chudleigh, the latter having served as an officer in the Royalist army in Ireland, after they sided with the Parliamentarian forces based at the garrison in Barnstaple, which also covered nearby Bideford. Their reason for not joining the Royalist cause was because of the prejudice they felt Charles I had shown the merchant classes of England. For example, The Crown had imposed a tax known as ship money on ports, greatly affecting trade through important mercantile ports like Bideford and Barnstaple.

Some time after August 1642 James Chudleigh built a pair of 8-gun earthwork artillery gun platforms on both sides of the River Torridge to guard the seaborne approaches to Bideford against attacks by Royalist ships. They were strategically positioned on the high ground at East-the-Water and West-the-Water.

By the summer of 1643 the Royalists, under Sir Ralph Hopton, had made major gains in the South West, having won victories at the Battle of Braddock Down (January 1643) and Stratton (May 1643), causing the Parliamentary forces to retreat into Bideford where they were then besieged. After more Royalist victories at Lansdown (July 1643) and Roundway Down (July 1643) it became clear that Bideford would not be relieved and in August 1643 it was stormed by Royalist forces of Colonel John Digby’s Regiment of Foot (Digby's brother was Sir Kenelm Digby). Following fierce fighting around the two forts the town fell. James Chudleigh was not in Bideford during the siege having taken part in fighting at Stratton.

At the end of the Civil War the forts were abandoned. The site at West-the-Water was built over as the town grew whereas the one on the hill at East-the-Water remained undeveloped. 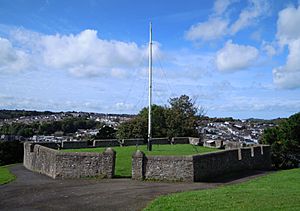 The rear of the 19th-century ornamental Chudleigh Fort.

In the mid 19th-century, the East-the-Water of gun platform was rebuilt in stone as a five-sided folly by James Ley from Northam, who gave it 14-gun emplacements instead of the original eight. Seven old cannons on wheeled wooden gun-carriages were also installed at the stone fort. Ley's fortification was never intended to be for genuine military purposes because its stone walls are too thin and with an open rear. The plaque on the wall states "Fort erected by Major-General Chudleigh. April 1642". However, this is an error as the Civil War did not start until August 1642. 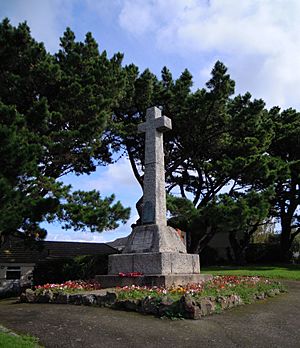 Bideford's War Memorial is near the fort in the park

The site was purchased by public subscription in 1921 for use as a public park in memory of those who died in World War I. At this time the war memorial was built, paths were laid out and the park was landscaped and laid to grass. Later the plaques on the war memorial were altered to commemorate the residents of Bideford who were killed or missing in World War I and World War II. The park is maintained by the Torridge District Council.

All content from Kiddle encyclopedia articles (including the article images and facts) can be freely used under Attribution-ShareAlike license, unless stated otherwise. Cite this article:
Chudleigh Fort Facts for Kids. Kiddle Encyclopedia.