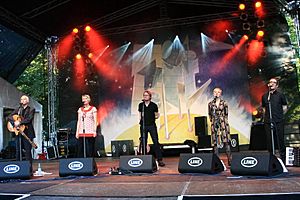 At the Rudolstadt-Festival, Thüringen, in 2012

Chumbawamba were a British alternative rock group. They were formed in 1982. They stopped in 2012. The band constantly changed their musical style. They music genres included punk rock, pop and folk.

The band were known for the 1997–98 hit song "Tubthumping". That was nominated for the Best British Single at the 1998 Brit Awards.

Between October 31 and November 3, 2012, Chumbawamba played their last three shows.

All content from Kiddle encyclopedia articles (including the article images and facts) can be freely used under Attribution-ShareAlike license, unless stated otherwise. Cite this article:
Chumbawamba Facts for Kids. Kiddle Encyclopedia.