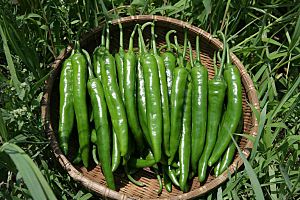 Red pepper grows well in high temperature. Proper temperature to grow is 25~28 °C during the day and 18~22 °C during the night. It's better not to drop the temperature under 13 °C. When temperature stabilizes in 20~25 °C it is the best time for plants to bear fruits. If the temperature drops under 15 °C or rise over 30 °C, fertility of the plant is seriously damaged resulting in windfall and malformed fruit.

Even though red pepper requires high temperature, it does not require that much of a sunlight. However, the deficit of sunlight in long-term can result in poor quality and number of the produce, so it is better to give adequate amount of sunlight. Light saturation point is 30,000 lx, which is lower than other typical vegetables.

Normally, farmers harvest peppers that are cultivated outdoors in late July. It ripens from the bottom and peppers placed closer to a root are more likely to ripen well and have more vivid red color. It can be harvested until we have the first frost and till then, we can harvest five times from one root in average. The quality of produce is affected by how many times have peppers being harvested. For example, if the root can bear fruits five times, then the first produce will have more thicker fruit skin and also the taste of it is better because the first one has strong sweet flavor and hot flavor at the same time in harmony. However, the color is little bit darker and less in red than the second or third one, so it is easy to be mistaken as worse produce than later produce. 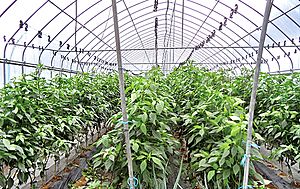 Technically through indoor cultivation, farmers can harvest through out the year. There is no quality difference between the first produce and the last one like the case mentioned in outdoor cultivation. The one raised in this environment has taller stem body and bears more fruits than the one raised outdoors. Especially, because it stays always indoors, it doesn't get wet, so can block all kinds of diseases caused by excessive humidity. Because of these advantages, more and more farmers cultivate Chungyang Red Pepper indoors.

All content from Kiddle encyclopedia articles (including the article images and facts) can be freely used under Attribution-ShareAlike license, unless stated otherwise. Cite this article:
Chungyang Red Pepper Facts for Kids. Kiddle Encyclopedia.