Chyler Leigh West (pronounced née Potts; born April 10, 1982), known professionally as Chyler Leigh, is an American actress, singer and model, best known for her portrayals of Janey Briggs in Not Another Teen Movie and Dr. Lexie Grey in the ABC medical drama Grey's Anatomy. In October, 2015, she began starring in the CBS/CW show Supergirl as Alexandra "Alex" Danvers.

In eighth grade, Leigh started modeling. She soon began acting by appearing in local television commercials and a syndicated teen news show called Hall Pass. In 1999, Leigh and her mother relocated to Los Angeles in order for Leigh to develop a career in acting.

Leigh started acting at an early age and debuted in the film world at age 15 in 1997's Kickboxing Academy. She started hosting in local TV shows and modeling; in 2001, Leigh nabbed the lead role in the box-office success Not Another Teen Movie as Janey Briggs. She also appeared in Marilyn Manson's music video "Tainted Love", a song which appeared in the film. She was ranked #65 on the Maxim Hot 100 Women of 2002. In 2002, Leigh was cast in two short-lived TV series: Girls Club, in which she played lawyer Sarah Mickle, and That '80s Show, in which she played punk rocker June Tuesday. She then became a series regular on the ABC legal drama The Practice. Following that, she joined the cast of Reunion in September, 2005.

In ABC's Grey's Anatomy, Leigh first appeared as a woman in Joe's bar who was noticed by Derek Shepherd while in the third-season finale, it was revealed that she was Lexie Grey. She was made an official series regular for season four, and remained so until the eighth-season finale.

Chyler Leigh also makes music with her husband Nathan West (East of Eli), under the name "WestLeigh". They have performed covers and originals songs. In 2015, for their thirteenth anniversary they wrote "Love Lit The Sky". On Saint Valentine's Day 2017 they released a single "Nowhere" and then she take part in tours.

In October, 2015, she began starring in the CBS/CW show Supergirl as Alexandra "Alex" Danvers. 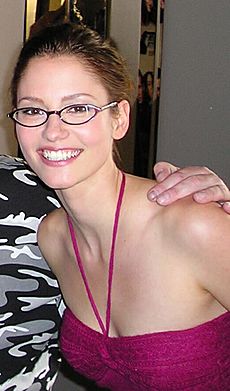 Leigh has said that she and her husband have a pact in which the person who guesses the baby's sex correctly gets to choose the name. When pregnant with Noah, she guessed she was having a boy so she chose the first name and Nathan gave him his middle name. For Taelyn, Nathan correctly guessed it was a girl, so he named her. Their third child, also a girl, was guessed correctly by West; he chose the name Anniston Kae.

Leigh is a Christian and credits her faith and a "really awesome church" with giving her and her husband "a reason to live." She also supports The Thirst Project, a non-profit organization in America which aims to bring safe drinking water to communities around the world.

All content from Kiddle encyclopedia articles (including the article images and facts) can be freely used under Attribution-ShareAlike license, unless stated otherwise. Cite this article:
Chyler Leigh Facts for Kids. Kiddle Encyclopedia.