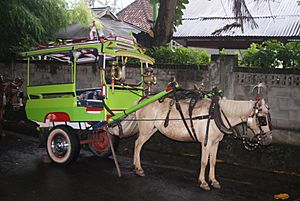 A Cidomo is a small horse-drawn carriage used in the Lesser Sunda Islands of Lombok and the Gili Islands of Indonesia.

The name Cidomo is derived from the Sasak word cika or cikar (a traditional handcart), dokar (Balinese for pony cart) and mobil for the wheels used to move it. It is also known as benhur after similarities to the Roman carts in the film Ben-Hur. 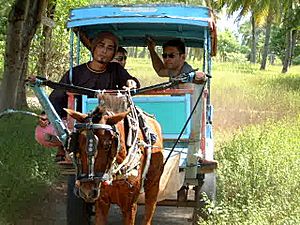 The carriage is usually brightly colored and often has many tassels and bells and pneumatic tyres. The carriage usually seats up to four people, two people in the front and two in the back. In the Gili Islands is one of the most common forms of transport as motor vehicles are not allowed.

One problem of the cidomo is that they are very slow and are partly responsible for creating traffic congestion in the towns. Dung from the horses is also posing an environmental problem in the towns and cidomo drivers have been urged by the Indonesian government to clean up after themselves or face suspension.

All content from Kiddle encyclopedia articles (including the article images and facts) can be freely used under Attribution-ShareAlike license, unless stated otherwise. Cite this article:
Cidomo Facts for Kids. Kiddle Encyclopedia.