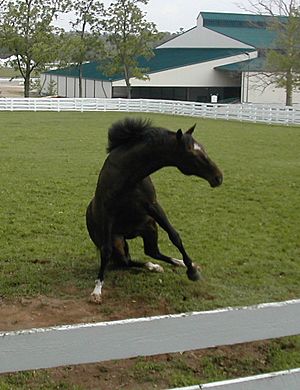 Cigar's daily roll in the dirt at Kentucky Horse Park

Cigar (April 18, 1990 – October 7, 2014), was an American Thoroughbred racehorse who, in 1995 and 1996, became the first American racehorse racing against top-class competition to win 16 consecutive races since Triple Crown winner Citation did so in 1948 and 1950. Cigar retired as the leading money earner in Thoroughbred racing history and was later inducted into the National Museum of Racing and Hall of Fame.

Cigar was named after a navigational intersection for airplanes, not for the tobacco product,. Owner Allen Paulson was a major figure in American aviation who had owned the Gulfstream Aerospace Corporation, which manufactured Gulfstream private business jets. He named many of his horses after the five-letter-long names given to intersections on aeronautical navigational charts. 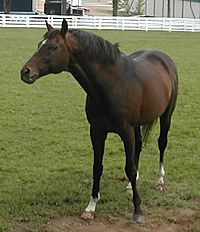 Further accolades came when Cigar was named the Racehorse of the Decade of the 1990s. In 2002, he was inducted in his first year of eligibility into the National Museum of Racing and Hall of Fame. In the Blood-Horse magazine ranking of the top 100 U.S. thoroughbred champions of the 20th Century, Cigar was ranked #18. In accordance with that ranking, Cigar is the highest-ranked American Thoroughbred during the decade of the nineties (1990–1999) and therefore lays claim to the title American "Horse of the Decade."

On February 2, 1997, a life-size bronze statue of Cigar was unveiled at Florida's Gulfstream Park on "A Salute to Cigar Day."

Cigar was retired to stud at the end of the 1996 racing season. Ceremonies took place during the National Horse Show at Madison Square Garden to honor the horse.

Cigar lived out his retirement at the Kentucky Horse Park's Hall of Champions in Lexington. Around April 2014, Cigar began to suffer increasingly from osteoarthritis in his spine, leading to instability in his legs. He underwent surgery to correct the problem but complications ensued and he died on October 7, aged 24.

All content from Kiddle encyclopedia articles (including the article images and facts) can be freely used under Attribution-ShareAlike license, unless stated otherwise. Cite this article:
Cigar (horse) Facts for Kids. Kiddle Encyclopedia.