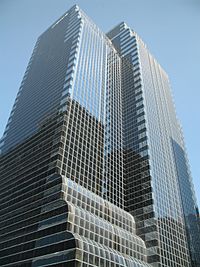 Citigroup Center is a 42 story, 588-foot (180 m) skyscraper in Chicago, Illinois. It is located at 500 W. Madison (between Clinton and Canal Streets). The structure was designed by the architecture firm Murphy/Jahn in a late modernist style. The building was named the Northwestern Atrium Center. It was constructed between 1984 and 1987.

On 8 December 2006 a man opened fire in a law office located on the 38th floor of the Citigroup Center. Four people, including the gunman, were killed. One person survived.

All content from Kiddle encyclopedia articles (including the article images and facts) can be freely used under Attribution-ShareAlike license, unless stated otherwise. Cite this article:
Citigroup Center (Chicago) Facts for Kids. Kiddle Encyclopedia.