The Civic Center Music Hall is a performing arts center located in Oklahoma City, Oklahoma. It was constructed in 1937 as Municipal Auditorium and renamed in 1966. The facility includes the Thelma Gaylord Performing Arts Theatre, the Freede Little Theatre, CitySpace, the Meinders Hall of Mirrors and the Joel Levine Rehearsal Hall. 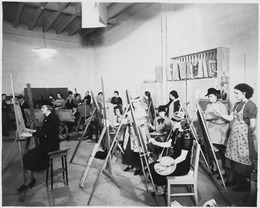 One of the community art centers created by the WPA Federal Art Project, the Oklahoma Art Center was located in Municipal Auditorium (1941) 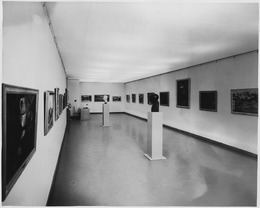 Exhibit at the Federal Gallery in the Oklahoma Art Center (1941)

In 1927, the Oklahoma City Chamber of Commerce and the city jointly purchased the land that would become home to a municipal auditorium after voters approved a $4 million bond for the site. President Franklin D. Roosevelt's New Deal programs in the 1930s contributed 55 percent of the cost of building through the Public Works Administration. J. O. Parr began planning and designing the Municipal Auditorium, budgeted at $1.25 million. The original design features a six-story building with both neoclassical and Art Deco features that seated 6,200 in the main hall and smaller theatre that seated 400.

In August 1935, the Roosevelt Administration announced that all PWA projects had to break ground by December 1935 or risk losing federal support. W. S. Bellows Construction became the primary contractor and began on-site excavation on time. The Municipal Auditorium was completed in April 1937. The first performance, "Rhapsodic Rhythms" took place on October 4, 1937.

In 1966, the Municipal Auditorium was remodeled and renamed the Civic Center Music Hall. The main auditorium was renovated to cater more to the performing arts by decreasing the size of the hall, moving the side wall in and installing mahogany panels, lowering the ceiling and replacing the portable floor with a sloped fixed floor. In 1971, the basement was converted into office space and later converted back to the theatre space and dressing rooms. One of the biggest concerts to ever play the venue was KISS on their 1976 Alive! tour. The band's opening act did not make it to the building forcing the management to find a new opening act on the day of the show. The band that was called to fill in was referred by the then Assistant Technical Director Richard Charnay (who would put in a 40+ year career at the music hall). The band was called Mountain Smoke which featured an unknown artist by the name of Vince Gill.

The Little Theatre was closed in 1985 because it was damaged from old age, abuse, and a fire. It was later renovated and reopened to the public.

The building was listed on the National Register of Historic Places in 2016.

The Civic Center Foundation, established in 2001, is a private non-profit organization that supports the Civic Center Music Hall financially to help bring performing arts to Oklahoma City to improve the community.

The Civic Center Music Hall is also home to STARS, a volunteer group of more than 300 people who contribute thousands of hours each year.

All content from Kiddle encyclopedia articles (including the article images and facts) can be freely used under Attribution-ShareAlike license, unless stated otherwise. Cite this article:
Civic Center Music Hall Facts for Kids. Kiddle Encyclopedia.