Clach an Trushal facts for kids 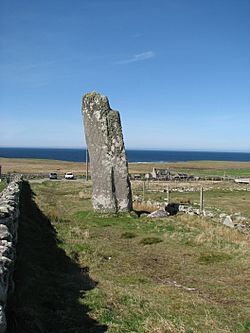 Clach an Trushal (Scottish Gaelic: Clach an Truiseil, Scottish Gaelic pronunciation: [kʰl̪ˠax ən̪ˠ ˈt̪ʰɾuʃal], translated to English "Stone of Compassion") is said to be the tallest standing stone in Scotland. Above ground it stands approximately 5.8 metres (19 feet 0 inches) tall, is 1.83 m (6 ft 0 in) wide and at its thickest point is 1.5 m (4 ft 11 in) thick, with a girth at its base of 4.75 m (15 ft 7 in). The stone is sited in the village of Ballantrushal on the west side of Lewis. Local legend says that it marks the site of a great battle, the last to be fought between the feuding clans of the Macaulays and Morrisons. However it is actually the solitary upright stone remaining from a stone circle built about 5,000 years ago. It occupied a place within the circle, although its placement was not central. The second last standing stone was removed in 1914, and used as a lintel.

From the base the stone circle at Steinacleit archaeological site is clearly visible to the north east. The Callanish standing stones are 20 miles (30 kilometres) southwest.

All content from Kiddle encyclopedia articles (including the article images and facts) can be freely used under Attribution-ShareAlike license, unless stated otherwise. Cite this article:
Clach an Trushal Facts for Kids. Kiddle Encyclopedia.