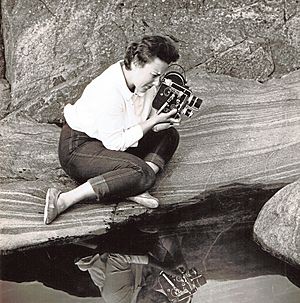 Claire Anita Aho (2 November 1925 – 29 November 2015) was a pioneering Finnish-born Swedish photographer. She started her career in the 1940s at the Aho & Soldan company. Aho moved to Sweden in 1974 where she worked as an photographer for several newspapers including Hufvudstadsbladet and with Nordic Museum.

All content from Kiddle encyclopedia articles (including the article images and facts) can be freely used under Attribution-ShareAlike license, unless stated otherwise. Cite this article:
Claire Aho Facts for Kids. Kiddle Encyclopedia.