Clapton Pond is a pond and garden at Clapton in the London Borough of Hackney.

The name ‘Clapton’ or ‘farm on the hill’ is derived from the Old English words ‘clop’, meaning a lump or hill, and ‘ton’, meaning a farm.

For centuries the land was owned by the Bishops of London, and occupied by tenant farmers who grew hay and food for the City of London.

By the late 18th century Clapton had become a fashionable place to live, with many fine country houses built for the rich merchants of London. Huguenot and Jewish communities also moved into the area, helping to develop Clapton into a prosperous neighbourhood.

In the 19th century Clapton turned from being a sleepy backwater into a bustling London suburb and many of its grand houses were demolished to provide land for new homes. This rapid growth was increased by the opening of Clapton railway station in 1872, and the arrival of the tramways. By the 1890s, the houses on Thistlewaite, Newick, Mildenhall and Millfields Roads had been built, supplying much needed housing for newcomers. 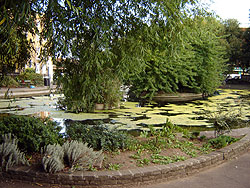 Another view of Clapton Pond

Despite the decline of Clapton's prosperity in the 1920s and 1930s, the first half of the 20th century saw Clapton Pond at its most glorious, a perfect setting for the unique buildings situated behind the pond - the 17th-century Bishop Wood's Almshouses, the late 18th-century Pond House and the two mid 18th-century houses.

The pond and gardens have always served as a focal point for the people of Clapton, from the few farmers who worked the land hundreds of years ago, to the multi-cultural community living and working in Clapton in the 21st century, who use it for public events and as a place to relax.

In recent years the Clapton Pond Neighbourhood Action Group has been working to renovate the pond.

All content from Kiddle encyclopedia articles (including the article images and facts) can be freely used under Attribution-ShareAlike license, unless stated otherwise. Cite this article:
Clapton Pond Facts for Kids. Kiddle Encyclopedia.