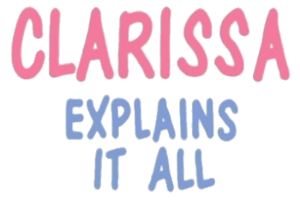 Clarissa Explains It All Logo

The name Clarissa is a female given name. It comes from the German name Clarice. Clarice, in turn, comes from the Latin word Clarus, which means "bright, clear or famous". Clarissa also has a Greek origin, meaning "brilliant".

People with the name include Clara Barton, who was born Clarissa Harlowe Barton.

A fictional teenage character named Clarissa was played by Melissa Joan Hart in Clarissa Explains It All during the early to mid 1990s.

All content from Kiddle encyclopedia articles (including the article images and facts) can be freely used under Attribution-ShareAlike license, unless stated otherwise. Cite this article:
Clarissa Facts for Kids. Kiddle Encyclopedia.