A medical/clinical mercury thermometer showing the temperature of 37.7 °C

A clinical thermometer is a thermometer is used for measuring human or animal body temperature.. Most old ones use mercury. It is accurate and sensitive, because it has a narrow place where the liquid rises very fast.

It is used in clinic by doctors so it is called a doctor's thermometer also. Most of these thermometers show both scales, Celsius scale and Fahrenheit scale. The scale runs from 35 degree Celsius to 42 degree Celsius.

Oral temperature may only be taken from a patient who is capable of holding the thermometer securely under the tongue, which generally excludes small children or people who are unconscious or overcome by coughing, weakness, or vomiting.

This is less of a problem with fast-reacting digital thermometers, but is certainly an issue with mercury thermometers, which take several minutes to stabilize their reading. If the patient has drunk a hot or cold liquid beforehand time must be allowed for the mouth temperature to return to its normal value.

The armpit (axilla) temperature is measured by holding the thermometer tightly under the armpit. One needs to hold the thermometer for several minutes to get an accurate measurement. 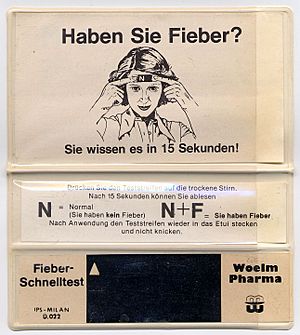 The ear thermometer was invented by Dr. Theodor H. Benzinger in 1964. At the time, he was seeking as way to get a reading as close to the brain's temperature as possible, since the hypothalamus at the brain's base regulates the core body temperature. He accomplished this by using the ear canal's ear drum blood vessels, which are shared with the hypothalamus.

Mercury-in-glass thermometers have been considered the most accurate liquid-filled types. However, mercury is a toxic heavy metal, and mercury has only been used in clinical thermometers if protected from breakage of the tube. In the 1990's it was decided that mercury-based thermometers were too risky to handle and have largely been replaced by electronic digital thermometers.

All content from Kiddle encyclopedia articles (including the article images and facts) can be freely used under Attribution-ShareAlike license, unless stated otherwise. Cite this article:
Clinical thermometer Facts for Kids. Kiddle Encyclopedia.