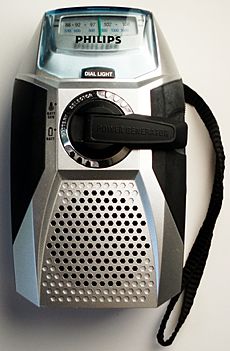 A hybrid battery/hand-crank radio by Philips.

A clockwork radio is a device that uses the energy of a spring to generate electricity to power the radio. The spring receives its energy by someone winding it up.

Human-powered devices are useful as emergency equipment, when natural disaster, war, or civil disturbance make regular power supplies unavailable. They have also been seen as economical for use in poor countries, where batteries may be expensive and mains power unreliable or unavailable. They are also an environmentally preferable alternative to the use of disposable batteries, which are wasteful source of energy and may introduce heavy metals into the environment. 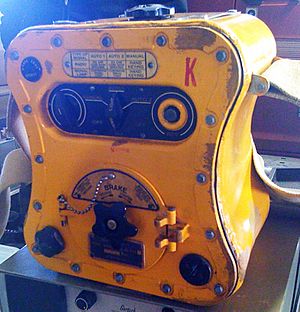 The World War II-era Gibson girl survival radio used a hand-cranked generator to provide power; this avoided the unreliable performance of dry-cell batteries that might be stored for months before they were needed, although it had the drawback that the survivor had to be fit enough to turn the crank. Survival radios were invented and deployed by both sides during the war. 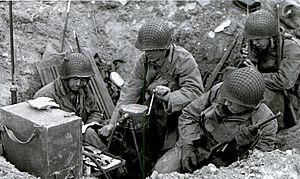 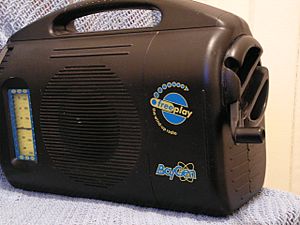 The original Baygen clockwork radio with crank in winding position

A windup radio or clockwork radio is a radio that is powered by human muscle power rather than batteries or the electrical grid. In the most common arrangement, an internal electrical generator is run by a mainspring, which is wound by a hand crank on the case. Turning the crank winds the spring and a full winding will allow several hours of operation. Alternatively, the generator can charge an internal battery.

Radios powered by handcranked generators are not new, but their market was previously seen as limited to emergency or military organizations. The modern clockwork radio was designed and patented in 1991 by British inventor Trevor Baylis. He envisioned it as a radio for use by poor people in developing countries without access to batteries.

Like other self-powered equipment, windup radios were intended for camping, emergencies and for areas where there is no electrical grid and replacement batteries are hard to obtain, such as in developing countries or remote settlements. They are also useful where a radio is not used on a regular basis and batteries would deteriorate, such as at a vacation house or cabin. 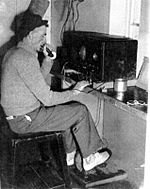 The Pedal Radio (or Pedal Wireless) was a radio transmitter-receiver powered by a pedal-driven generator. It was developed by Alfred Traeger in 1929 as a way of providing radio communications to remote homesteads in the Australian outback. There were no mains or generator power available at the time and batteries to provide the power required would have been too expensive. It is considered an important Australian invention.

All content from Kiddle encyclopedia articles (including the article images and facts) can be freely used under Attribution-ShareAlike license, unless stated otherwise. Cite this article:
Clockwork radio Facts for Kids. Kiddle Encyclopedia.