Cloonacauneen Castle is a restored 15th-century tower house with an attached wing. It is privately-owned, and is located in the northeast outskirts of Galway city in County Galway, Ireland. 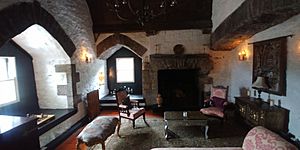 A common room inside the castle

The castle was built in the 15th century. By 1914, it had fallen into disrepair. In 1963, a restoration effort was started by the Lenihan family, which saw the roofs of the castle and guest house replaced and the battlements raised back to their original height.

Unusually, the castle's owners have been recorded since as early as 1574, when it was owned by Richard Beag Burke.

The castle nowadays primarily functions as a restaurant and pub, tourist destination, and hotel. It is commonly used for events such as weddings and corporate functions.

All content from Kiddle encyclopedia articles (including the article images and facts) can be freely used under Attribution-ShareAlike license, unless stated otherwise. Cite this article:
Cloonacauneen Castle Facts for Kids. Kiddle Encyclopedia.