Clue is an American five-part mystery television miniseries based on the Parker Brothers board game of the same name, which aired on The Hub from November 14, 2011 to November 17, 2011. The series features a youthful, ensemble cast working together, uncovering clues to unravel a mystery.

The series was created by Raven Metzner and stars Sterling Beaumon as Seamus, Sarah Desjardins as Whitney, Kendall Amyre Ferguson as Agnes, Ana Golja as Liz, Stephan James as Dmitri, and Zach Mills as Lucas.

The series follows six very different young sleuths nicknamed after the characters from the game of the same American name as they witness a terrible crime and embark on a mysterious adventure they could never have imagined. Along the way, they find they have more in common than they thought, as they uncover hidden treasures and decipher cryptic knowledge to reveal a dark and secret society. 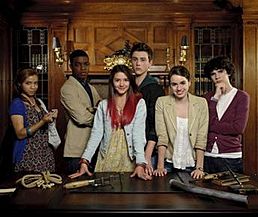 The cast bears some similarities to the 2012 spin-off Clue: The Classic Mystery Game, which also features secret societies/houses.

The series re-cut as a two-hour TV film.

All content from Kiddle encyclopedia articles (including the article images and facts) can be freely used under Attribution-ShareAlike license, unless stated otherwise. Cite this article:
Clue (miniseries) Facts for Kids. Kiddle Encyclopedia.