Station No. 31 was built in 1874 on the west shore of Cape Cod Bay, on Manomet Point, 5 3/8 miles south southeast of Gurnet Light, near the site of the old Mayflower Hotel. The associated boathouse was at the bottom of the hill close to the beach. USCG Station 31 was built at the end of the Point and was opened on April 1, 1901 with George B. Holmes in charge. The 1874 T-Type station still exists as a private home in its original location. Some changes have been made to the building but most of the structural details are still in evidence.

It was decommissioned in 1947, turned over to the General Services Administration in 1955 and ultimately dismantled. Most views of Station #31 show the front view with the boathouse on the right. The doors to the boathouse opened to the rear. When the Station was demolished in 1955 Carl Asker moved the boathouse and attached it to his house on State Road. The structure is still visible with the doors opening onto State Road.

Seven oarsman and Cashman tried again and again to reach the stricken ship via their oar-powered surf boat, but were held back by raging seas. (They were unaware that passengers and crew did not appear to be in imminent danger because the captain had securely scuttled the ship on the rocks). The Guardsmen ultimately reached the liner on March 10 and assisted in rescue efforts. The Guardsmen were on a return trip to the station when their surf boat overturned in "an unusually ponderous sea." Three drowned.

"It was only one of the thousands of seas that the lifeboat had ridden buoyantly during the morning. But it caught her in a shoal place and it was an unusually ponderous sea. Its foot 'tripped' on the bottom and it towered high in the air, tilting the boat's bow down and flinging Cashman almost above the heads of his seven oarsmen.

Then the wave broke at the crest, and the boat was whirled over, the men dropping out, clutching at one another and at the great oars that were tumbling down with them. Hundreds of people were watching the boat, and a great cry went up from the crowd. People began to run down to the bowlder(sic)-strewn beach, helplessly enough, in their distress."

A number of young men watching from the shore secured small rowboats and rushed out to the stricken surf boat. Those rescuers were later awarded Carnegie Medals for bravery.

Stark died en route to a Boston hospital; Cashman died on the beach after lengthy resuscitation by a doctor, and Griswold's body eventually washed ashore about two miles away. The five others were treated at hospitals in Plymouth and Chelsea. 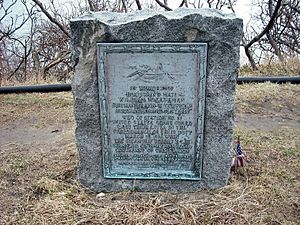 A memorial plaque and stone monument for the fallen 3 heroes was installed at the tip of Manomet Point in May, 1928 by the citizens of Plymouth. It reads:

In memory of Boatswain's Mate William H. Cashman, Surfman Frank W. Griswold, Surfman Edward P. Stark, who of Station No. 31 United States Coast Guard lost their lives in the performance of their duty, March 10, 1928, when the Steamship Robert E. Lee stranded on the Mary Ann Rocks Southeast of this station.

Greater love hath no man than this, that a man lay down his life for his friends.

Community efforts were begun in March, 2010 to obtain formal hero status for the three fallen Coast Guardsmen from the government and military, and to improve the memorial site at the Point.

All content from Kiddle encyclopedia articles (including the article images and facts) can be freely used under Attribution-ShareAlike license, unless stated otherwise. Cite this article:
Coast Guard Station Manomet Point Facts for Kids. Kiddle Encyclopedia.