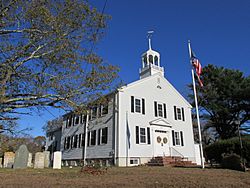 The Second Church of Plymouth at Manomet

Manomet is a seaside village of Plymouth, Massachusetts, United States. It is named for the Manomet Native American sub-group of the Wampanoag whose settlement was located atop the dominant hill in the region when European settlers arrived in Plymouth in 1620. Manomet has a Post Office in the business district whose ZIP code is 02345. Residents and businesses in this village that are non-Post Office box holders use Plymouth's ZIP code of 02360.

Pilgrim Station, the only operating nuclear power plant in Massachusetts, is located in Plymouth, north of Manomet.

Today, Manomet is known for its Independence Day celebrations, which actually take place one day early, on the 3rd of July. The celebrations usually consist of private bonfires, fireworks, and a typically family oriented crowd. Manomet's July 3 celebration of Independence Day extends back to the 1800s, when residents burned scrap and driftwood on the beach. Tradition dictates that these bonfires be extinguished by the rising tide, so depending on the moon, the festivities may extend well into the night, or end relatively early. The 3rd of July celebrations are featured in a song called "Manomet (On The 3rd Of July)" written by longtime Manomet resident Tedd Rodman.

Manomet consists of the following neighborhoods:

All content from Kiddle encyclopedia articles (including the article images and facts) can be freely used under Attribution-ShareAlike license, unless stated otherwise. Cite this article:
Manomet, Massachusetts Facts for Kids. Kiddle Encyclopedia.