Coat of Arms of Croatia facts for kids 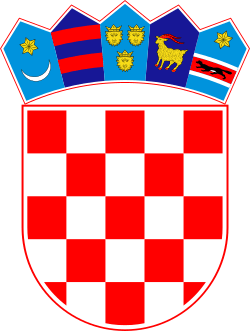 The coat of arms of Croatia (Croatian: Grb Republike Hrvatske) consists of one main shield and five smaller shields that form a crown over the main shield. The main coat of arms is a checkerboard (chequy) that consists of 13 red and 12 silver (white) fields. It's also known in Croatian as šahovnica ("chessboard", from šah, "chess"). The five smaller shields represent five different historical regions within Croatia. It was adopted on 21 December 1990.

All content from Kiddle encyclopedia articles (including the article images and facts) can be freely used under Attribution-ShareAlike license, unless stated otherwise. Cite this article:
Coat of Arms of Croatia Facts for Kids. Kiddle Encyclopedia.