Coat of Arms of Serbia facts for kids 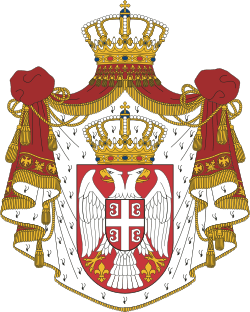 Blazon: The principal field stands for the Serbian State (Gules a double-headed eagle with wings displayed and inverted Argent, langued, beaked, legged and unguled Or, between two fleurs-de-lys of the third in base), while inescutcheon stands for Serbian Nation (Gules a cross Argent between four fire-steels of the same).

All content from Kiddle encyclopedia articles (including the article images and facts) can be freely used under Attribution-ShareAlike license, unless stated otherwise. Cite this article:
Coat of Arms of Serbia Facts for Kids. Kiddle Encyclopedia.