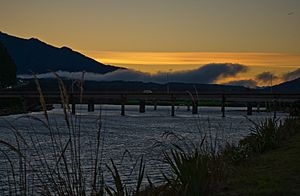 Bridge between Cobden and Greymouth centre

Cobden is a suburb to the north of Greymouth on the West Coast of New Zealand. The Grey River separates Cobden from the rest of Greymouth. To the north is the Rapahoe Range, also called the Twelve Apostles Range. State Highway 6 skirts the south-eastern edge of Cobden.

During the period, 1853 to 1876, Cobden was administrated as part of the Nelson Province.

All content from Kiddle encyclopedia articles (including the article images and facts) can be freely used under Attribution-ShareAlike license, unless stated otherwise. Cite this article:
Cobden, New Zealand Facts for Kids. Kiddle Encyclopedia.