A Cockapoo (also known as a spoodle) is a mixed-breed dog that is the cross between either Cocker Spaniel breeds (American Cocker Spaniel or English Cocker Spaniel) and a poodle (in most cases a miniature poodle or toy poodle).

A Cockapoo can be the result of mating either the American Cocker Spaniel or English Cocker Spaniel with a Poodle. They have been known in the United States since the 1950s.

Smaller dogs tend to be quite long-lived, and hence it is not unusual for Cockapoos to have a lifespan of 14–18 years. 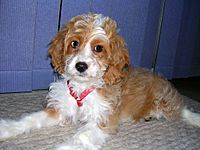 Cockapoos have become popular because they generally combine the outgoing, loving personality of the Cocker Spaniel with the low-shedding, low-dander qualities of the Poodle. Cockapoos are active and thrive when they receive regular exercise. Cockapoos can be very agile, excelling at "retrieve" games and enjoying activities such as swimming.

The Cockapoo is a cross-breed, and does not "breed true", which means that the pups will have consistently predictable characteristics. Cockapoos, however, may inherit the characteristics of either or both their parent breeds. While some Cockapoos appear more similar to Cocker Spaniels, others will exhibit more Poodle traits, creating a variation in Cockapoo appearance and temperament. 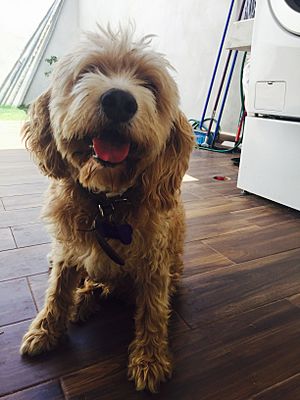 They are very noble and playful 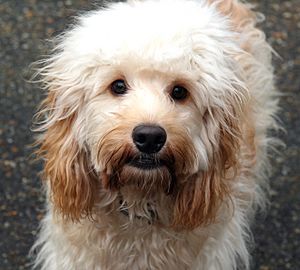 A white cockapoo with brown markings.

Cockapoos vary in color. They may be:

Cockapoos can be one solid color or can have complex markings. They can be white with patches of any color. They can also have spots or freckles of color, called ticking. Cockapoos may also have a merle coat, where random portions are diluted to create a mottled appearance.

The coat of the Cockapoo will vary from dog to dog. Most will have a coat somewhere between a Cocker Spaniel and a Poodle. Although the coat is usually low-shedding, it grows quickly and requires frequent grooming and clipping in order to prevent matting, as the long, wavy coat will retain dirt and debris.

Cockapoo size and weight are a function of what type of dogs the parents were. Breeders usually use a Toy or Miniature Poodle as the Poodle parent.

All content from Kiddle encyclopedia articles (including the article images and facts) can be freely used under Attribution-ShareAlike license, unless stated otherwise. Cite this article:
Cockapoo Facts for Kids. Kiddle Encyclopedia.