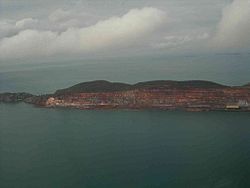 Cockatoo Island approached by air from the south-west. The mine working along western edge of the island and the townsite at the northern end (left of photo) are visible. 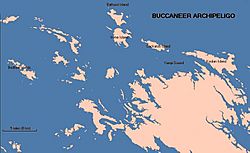 Cockatoo Island is an island in the Buccaneer Archipelago off the coast of Western Australia near the town of Derby. It was mined for iron ore by the Broken Hill Proprietary Company from 1951 until 1984. Koolan Island is a neighbouring island that was also mined by BHP for high grade iron ore. It is now owned by Perth-based mining company, Pluton Resources.

The ironstone of Cockatoo Island was known to pearl luggers in the 1880s, who used it as ballast on their voyages. The Broken Hill Proprietary Company first acquired leases to the island's mineral deposits in 1928, via the company's subsidiary, Australian Iron and Steel Ltd. The island was first surveyed in 1930, then again more comprehensively in 1936. The island was evacuated with the outbreak of World War II and work on the deposit did not resume until 1944.

By October 1945 over 100 men were employed on Cockatoo Island and work was underway laying a foundation for the processing plant, building a jetty and layout the township. Iron ore mining began in 1951. In 1952, the island's population numbered 150. By 1954, the mine was capable of shipping up to 2 million tonnes of iron ore annually.

The BHP operated the mine and managed the township from its establishment until 1984 when the ore body had been mined down to sea level. HWE Mining and Portman Mining Ltd re-opened operations in the 1990s by first retreating waste-rock from old BHP dumps, then forming a seawall and commencing mining below sea level.

The townsite established by BHP contained a school, movie theatre, and even a lockup prison.

The first shipment of iron ore from the island was made in the vessel Iron Yampi, which was purpose-built at the Whyalla shipyard. It was one of a fleet of four bulk-carriers built to transport the ore for smelting at Australian steelworks. The Iron Kimberley was another of them.

During the 1980s businessman Alan Bond and wife, Eileen Bond, opened a tourist resort using the old mining village's infrastructure. The resort was closed and sold to HWE Mining, however the chalets are still used by workers on the island.

All content from Kiddle encyclopedia articles (including the article images and facts) can be freely used under Attribution-ShareAlike license, unless stated otherwise. Cite this article:
Cockatoo Island (Western Australia) Facts for Kids. Kiddle Encyclopedia.