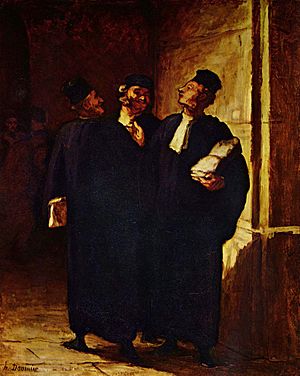 Leon Festinger proposed that human beings strive for internal psychological consistency in order to mentally function in the real world. That a person who experiences internal inconsistency tends to become psychologically uncomfortable, and so is motivated to reduce the cognitive dissonance.

The Fox and the Grapes 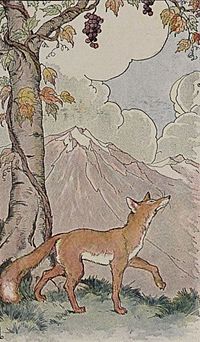 "The Fox and the Grapes" by Aesop

The fable of "The Fox and the Grapes", by Aesop, is an exemplar of cognitive dissonance by the subversion of rationality. A fox spies high-hanging grapes and wishes to eat them. When unable to reach the grapes, the fox decides the fruit are not worth eating, and justified his decision, claiming to himself, that the grapes likely are sour, for being unripe.

The moral of the fable is that "Any fool can despise what he cannot get"; hence the popular phrase about dismissing a thwarted goal as "unimportant" is mere expression of sour grapes.

The pattern of psychological behavior illustrated in the fable of "The Fox and the Grapes" indicates that: When a person desires something and finds that it is unattainable, he or she diminishes it by criticizing the object of desire as worthless

All content from Kiddle encyclopedia articles (including the article images and facts) can be freely used under Attribution-ShareAlike license, unless stated otherwise. Cite this article:
Cognitive dissonance Facts for Kids. Kiddle Encyclopedia.