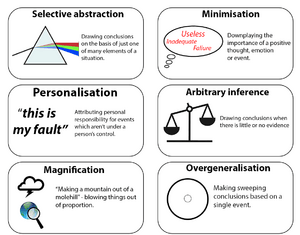 Examples of some common cognitive distortions seen in depressed and anxious individuals. People may be taught how to identify and alter these distortions as part of Cognitive Behavioural Therapy

Cognitive distortions are irrational or exaggerated thoughts that can cause some psychological problems to become worse. By following these wrong thought, they make if very hard to do the things they want to do. This may cause problems such as depression.

There are many forms of cognitive distortions. Some of these include:

All content from Kiddle encyclopedia articles (including the article images and facts) can be freely used under Attribution-ShareAlike license, unless stated otherwise. Cite this article:
Cognitive distortions Facts for Kids. Kiddle Encyclopedia.