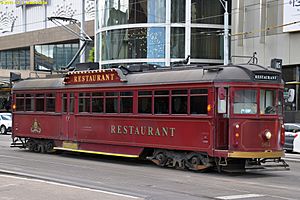 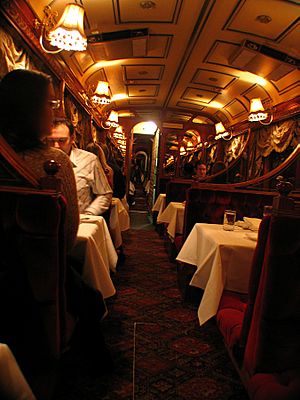 The Colonial Tramcar Restaurant is a restaurant operating from a converted fleet of three vintage W class trams in Melbourne, Australia.

The Colonial Tramcar Restaurant Company Limited was formed in 1981 to operate restaurant trams, with 1927 W2 class tram number 442 acquired for conversion after 55 years of Melbourne & Metropolitan Tramways Board service. Conversion work commenced in 1982 at Preston Workshops, with the drop centre floor raised to give a level floor throughout, and a single entry door provided on one side of the tram. Two saloons were provided either side of a central kitchen and washroom, one saloon seating 12 while the other seats 24 patrons. It was based at the Metropolitan Transit Authority's (MTA) South Melbourne depot.

The service started on 2 November 1982 (Melbourne Cup day) with the single tram, as amendments were required to the Liquor Licence Act to allow for the service of alcohol on a mobile restaurant. The driver and conductor were provided by the MTA while onboard staff are Colonial Tramcar Restaurant employees. Until 1992, the restaurant had to carry a conductor to comply with tramways union regulations about two-man teams operating all trams (in case the brakes failed). This conductor cost the Colonial Tramcar Restaurant $50,000 per year until former premier Jeff Kennett did away with the need for conductors. One of the conductors was a lady who could be seen knitting throughout the entire service.

The restaurant, which has one lunch and two dinner sittings each day, advises booking well in advance. The trams are boarded from the Clarendon Street Junction stop near the Melbourne Exhibition and Convention Centre. They then run on selected standard tram routes through the city and some nearby inner suburbs, returning to their origin. The ride in the restaurant tram is generally quite steady. Food is prepared offsite in a commercial kitchen and is loaded onto the trams in a raw form. Each tram has its own chef and all of the food is freshly cooked as the tram is moving. The menu provides a limited choice, as does the wine list. However, unlimited alcohol is included in the fixed, prepaid meal price.

On 11 August 2012, 30 diners and three staff had to be evacuated from one of the restaurant tramcars after it caught fire in East Melbourne.

In 1985 The Colonial Tramcar Restaurant became the first restaurant in Melbourne to ban smoking.

On 19 October 2018, Yarra Trams announced that the restaurant trams had been withdrawn from service and were no longer allowed to operate on the network due to safety considerations. At the same time, Yarra Trams said it was working with the restaurant operator to enable a "stationary dining experience" to continue.

All content from Kiddle encyclopedia articles (including the article images and facts) can be freely used under Attribution-ShareAlike license, unless stated otherwise. Cite this article:
Colonial Tramcar Restaurant Facts for Kids. Kiddle Encyclopedia.