Following the opening of its expansion in 2018, Melbourne Convention and Exhibition Centre regained the status as being the largest convention and exhibition venue in Australia and one of the largest spaces in the southern hemisphere.

The total size of the Melbourne Convention and Exhibition Centre is 70,000 square metres. The venue consists of 63 meeting rooms, outdoor courtyard spaces, a Plenary that can be divided into three self-contained acoustically separate theatres, the Goldfields Theatre a 9,000 square metre multi-purpose event space with a retractable 1,000-seat theatre and 39,000 square metres of pillarless exhibition space.

In 2018/19 Melbourne Convention and Exhibition Centre contributed more than $1.10 billion in economic impact to the state of Victoria.

On 28 August 2002, the Trust was appointed the Committee of Management of the Yarra River Maritime Reserve. The Reserve is inclusive of the land and historic sheds located on the south bank of the Yarra River between Grimes Bridge and the Melbourne Maritime Museum. This appointment was revoked in June 2006 as part of the land consolidation process necessary for the development of the Melbourne Convention Centre and associated works referred to below.

The Melbourne Exhibition Centre was opened on 14 February 1996 and is known colloquially as "Jeff's Shed" after the then Victorian Premier, Jeff Kennett.

The building was designed by Denton Corker Marshall, an architectural firm responsible for many of Melbourne's larger buildings through the early 1990s, and features their characteristic "blade" entrance. In 1998 a covered footbridge was erected between the Exhibition and Convention centres, parallel to the Spencer Street Bridge. 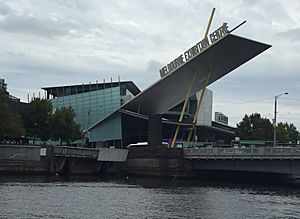 Melbourne Convention Centre viewed from the Yarra River on 9 February, 2018

The building has become an icon in Melbourne due to the main entrance marked by a prominent tilted metal blade supported by a pair of yellow sticks in combination with the 450 metre urban verandah, parallel to the internal concourse, supported by a forest of smaller sticks. The verandah and the new riverside park make a major contribution to the public realm of the city.

The former Convention Centre on the Flinders Street side of the Yarra River was opened in May 1990 and has hosted thousands of conventions and meetings. The building was originally intended to be used by the Melbourne Museum but Jeff Kennett intervened during construction to have the building used as a convention centre.

The current Melbourne Convention Centre, on land adjacent to the Exhibition Centre, was opened on 5 June 2009. At a cost of A$1 billion, the development consists of a 5541-seat Plenary Hall that can be divided into three separate theatres, a grand banquet room as well as a hotel, office, residential and retail space. It was developed by a consortium led by Brookfield Multiplex and Plenary Group and designed by Larry Oltmanns. The centre uses a range of features in order to achieve a 6 Star Green Star environmental rating and to become the first convention centre in the world with that rating. The architects for the development were NH Architecture and Woods Bagot.

On 5 May 2015, the Victorian State Government announced $205 million for the expansion of Melbourne Convention and Exhibition Centre in the 2015/16 State Budget. This project commenced in May 2016 and opened on 1 July 2018. The 20,000-square-metre expansion includes 9,000 square metres of exhibition space plus additional flexible, multi-purpose event space, 1,000-seat theatre, multiple meeting rooms, a banquet room and a café and bar.

The building design was a joint venture between architect firms: NH Architecture and Woods Bagot. The expansion is part of a larger South Wharf expansion project by Plenary Group that includes a new 347-room Novotel Melbourne South Wharf and a new 1,150-space multi-level car park – all fully connected and integrated with existing buildings. 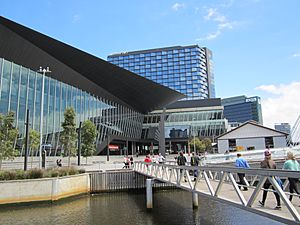 The Melbourne Convention Centre in December 2012

The building resembles a long shed with separated operable walls (each valued at $250,000). This allows the space to be split from a maximum of 39,000 square metres to a minimum of 3,000 square metre spaces. The single volume with a proportion of length to width of approximately 2.5:1 was chosen. Other than the exhibition space, the building also has a basement that is able to hold 1,000 cars. From the main entrance, visitors would be able to see the 450 metres southward vista of the concourse as well as the mezzanine balconies. On the first floor of the entry pavilion and extending along the mezzanine platform, there are meeting and function rooms which separates the double-height hall and concourse. Some have large windows overlooking the exhibition.

The site for the Exhibition Centre was previously the site for Daryl Jackson’s Museum of Victoria. The brief required DCM to work with the partially built concrete structure. According to Melbourne architect and critic Norman Day, the column-free space could be associated to the Russian Constructivist of the 1920s such as the Vesnin brothers' Kiev railway station scheme 1926. Another relation to the Russian Constructivist is the cantilevered structure supported by yellow steel props as well as the large metal letters arranged over the top of the entrance.

Due to the brief that required the building to be constructed in a short amount of time and save cost, a repetitive system of identical trusses clad in aluminium sheet were used. On top of that, the trusses have to be solid in order to provide sound isolation from one hall to the next. At the same time, in order to reduce the span, and to stiffen them laterally, the architects tapered them in cross section.

The two rows of columns that are located in the verandah (the building’s long frontage facing the river) are intended to give a subtle separation of the interior and exterior of the building.

The blades which are located along the concourse are coloured in a series of Francis-Bacon-inspired colours, with hall numbers stencilled on. This serves as a double purpose of punctuating the linear volume and labelling the halls.

Significance and contribution to Australian architecture

The aerodynamic treatment of the colonnade canopy, which disperses wind, influenced another Melbourne architect, Peter Elliott, in the design of the Spencer Street Footbridge in 1999.

The Melbourne Convention Centre was awarded the Australian Construction Achievement Award in 2010.

The Melbourne Exhibition Centre was awarded the Sir Zelman Cowen Award for public architecture in 1996.

All content from Kiddle encyclopedia articles (including the article images and facts) can be freely used under Attribution-ShareAlike license, unless stated otherwise. Cite this article:
Melbourne Convention and Exhibition Centre Facts for Kids. Kiddle Encyclopedia.