Commonwealth Bank Building is a heritage-listed bank at 38 Morgan Street, Mount Morgan, Rockhampton Region, Queensland, Australia. It was built c. 1913. It is also known as Queensland Savings Bank. It was added to the Queensland Heritage Register on 21 October 1992. 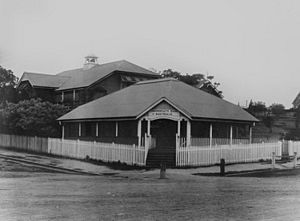 The Queensland Government Savings Bank was established by one of the earliest pieces of legislation enacted by the government of the new colony of Queensland in 1861. Intended to encourage small deposit saving by working people, savings banks could be established by the gazettal of an application by ten or more house or landholders in any community of more than 500 people. In 1864, the Government Savings Bank Bill provided a government guarantee to protect trustees and deposits and to allow depositors to easily transfer accounts from one town to another. It was a great success and on 9 May 1887, the Savings Bank opened an agency at the Mount Morgan Post Office.

The township of Mount Morgan grew with the establishment of what was to become the richest gold mine in the world. Although small mining claims occurred before 1882, the three Morgan Brothers pegged claims which encompassed most of the mountain top in that year. In July they formed a partnership with three Rockhampton businessmen before selling out to them 1886 when the Mount Morgan Gold Mining Company Limited was formed. The township quickly developed, establishing an infrastructure for the rapidly increasing population. The Queensland National Bank also opened in Mount Morgan in 1887, although this was a trading, rather than a savings bank, these activities at the time being kept separate.

The Commonwealth Bank of Australia was founded under the Commonwealth Bank Act of 1911. This empowered the Bank to transact both savings and trading business under the security of a guarantee from the Australian Government. It opened its first branch for business on 15 July 1912 in Melbourne and soon opened agencies in post offices throughout Victoria. The Queensland branch was opened on 16 September 1912. Post offices were used as agencies throughout the country as they had been transferred to Commonwealth control after Federation. The Commonwealth Bank of Australia merged with the state banks of Tasmania in 1912, Queensland in 1920 and Western Australia and New South Wales in 1931.

In 1913 the Queensland Government Savings Bank opened its own branch on the corner of Morgan and Central Streets on an area that was designated a reserve for the purpose. It was a modest timber building with timber dowel balustrades along both streets. The site was adjacent to the Central State School which had constructed its first building nearby in 1887. Subsequent building at the school eventually wrapped around the corner site on which the bank was built.

By the late 1970s the original verandahs of the bank were enclosed and the exterior walls on these sides were removed to enlarge the interior space available. A set of concrete steps was added around 1980.

In 1990 the Mount Morgan mine closed, leading to a reduction of population and business in the town. The Commonwealth Bank ceased trading from this site in 1998. The building is currently being used as the offices of Learning Network Queensland.

The former Commonwealth Bank building is situated on the corner of Morgan and Central Streets, Mount Morgan, in the north east corner of the Central State School site. It is a single storey, timber framed structure, clad with horizontal weatherboards and set on low stumps. The building has a rectangular plan, truncated at the corner facing the intersection of the two streets to allow for a principal corner entrance. This is below an entrance gable and is accessed by concrete steps and shaded by a small cantilevered awning. The vented hipped roof is clad with corrugated iron sheeting which extends over the former verandahs. To the south is a skillion roof extension which houses the strong room and offices. There is also a fibrous cement clad extension on the south east corner which accommodates toilets. Banks of glass louvres under the eaves line the north and west sides of the building, which address the streets. The eastern side has a pair of sash windows shaded by a single sunhood.

The interior is now largely open plan, although a change in ceiling height demonstrates the position of former verandahs. The walls and ceiling are lined with tongue and groove boards. To the south are offices and a strong room with a heavy metal door inserted into a brick section between the timber office and toilets extension.

The former Commonwealth Bank building was listed on the Queensland Heritage Register on 21 October 1992 having satisfied the following criteria.

The former Commonwealth Bank as a branch of the Queensland Government Savings Bank demonstrates the regional development of the state and its presence is suggestive of the large number of workers present in the town because of the Mount Morgan Mine.

The building is characteristic of small timber banks in regional towns, modest in scale and finish, but occupying a prominent corner site.

As Mount Morgan's only bank for 21 years and one which served the community for the best part of the 20th century, and as the premises of the institution which acted as an agent of the Commonwealth during the war, the former bank building has an important connection with the Mount Morgan community.

All content from Kiddle encyclopedia articles (including the article images and facts) can be freely used under Attribution-ShareAlike license, unless stated otherwise. Cite this article:
Commonwealth Bank Building, Mount Morgan Facts for Kids. Kiddle Encyclopedia.