The Comrades Marathon is an ultramarathon of approximately 89 kilometres (55 mi) which is run annually in the KwaZulu-Natal province of South Africa between the cities of Durban and Pietermaritzburg. It is the world's largest and oldest ultramarathon race. The direction of the race alternates each year between the "up" run (87 km) starting from Durban and the "down" run (now 90.184 km) starting from Pietermaritzburg.

The 2019 field was capped at 25,000 runners, and the entry process closed after one week. South African runners constitute the greater part of the field, but many entrants hail from the United Kingdom, Zimbabwe, India, the United States, Brazil, Australia, Botswana, Russia and Swaziland. In all but three runnings since 1988, over 10,000 runners have reached the finish within the allowed 11 or 12 hours. With increased participation since the 1980s, the average finish times for both sexes, and the average age of finishers have increased substantially.

Runners over the age of 20 qualify when they are able to complete an officially recognised marathon (42.2 km) in under five hours (4h50 for 2019). During the event an athlete must also reach five cut-off points in specified times to complete the race. The spirit of the Comrades Marathon is said to be embodied by attributes of camaraderie, selflessness, dedication, perseverance, and ubuntu. 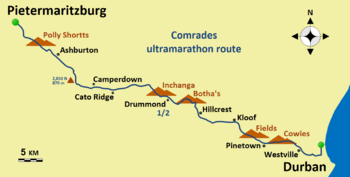 Course of the ultramarathon

The race is run on the roads of KwaZulu-Natal province, marked by "The Big Five" set of hills. On the up run they appear in the following order: Cowies Hill, Fields Hill, Botha's Hill, Inchanga, and Polly Shortts. The highest point of the race, at 2,850 feet (870 m) above sea level, is situated near Umlaas Road interchange. 40 official refreshment stations along the route are stocked with soft drinks, mageu, water sachets, energy drink sachets, fruit, biscuits, energy bars and cooked potatoes. Eight physiotherapy and first aid stations are also located at strategic points.

All content from Kiddle encyclopedia articles (including the article images and facts) can be freely used under Attribution-ShareAlike license, unless stated otherwise. Cite this article:
Comrades Marathon Facts for Kids. Kiddle Encyclopedia.