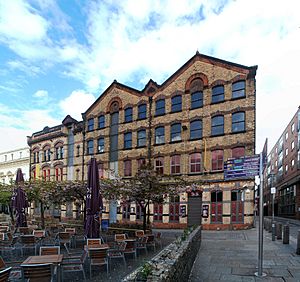 Concert Square is a square located between Wood Street and Fleet Street in the RopeWalks area of Liverpool City Centre, England. The square and the immediate surrounding area is often referred to as the heart of Liverpool's nightlife, due to the area being populated with some of the best known nightclubs and bars in the city, and indeed the North West of England. The square has often been a centre for football fans' celebration. A 2019 survey of university students in the UK found two Liverpool universities ranked amongst the top 5 for nightlife, with Concert Square being cited as a factor.

Some of the bars and nightclubs in and around the Concert Square area are:

All content from Kiddle encyclopedia articles (including the article images and facts) can be freely used under Attribution-ShareAlike license, unless stated otherwise. Cite this article:
Concert Square, Liverpool Facts for Kids. Kiddle Encyclopedia.