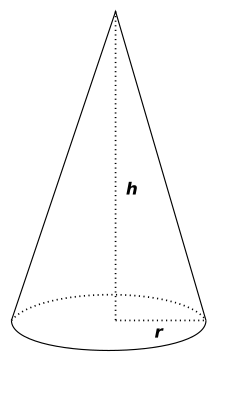 A cone, marked with its height (h) and radius (r)

In common speaking and geometry, a cone is a solid object that one gets when one rotates a right triangle around one of its two short sides, the cone's axis. The disk made by the other short side is called the base, and the point of the axis which is not on the base is the cone's apex or vertex. An object that is shaped like a cone is conical.

In more technical terms, a cone is formed by a set of line segments, half-lines, or lines connecting a common point, the apex, to all of the points on a base that is in a plane that does not contain the apex. Depending on the author, the base may be restricted to be a circle, any one-dimensional quadratic form in the plane, any closed one-dimensional figure, or any of the above plus all the enclosed points. If the enclosed points are included in the base, the cone is a solid object; otherwise it is a two-dimensional object in three-dimensional space. In the case of a solid object, the boundary formed by these lines or partial lines is called the lateral surface; if the lateral surface is unbounded, it is a conical surface.

All content from Kiddle encyclopedia articles (including the article images and facts) can be freely used under Attribution-ShareAlike license, unless stated otherwise. Cite this article:
Cone Facts for Kids. Kiddle Encyclopedia.