Base (geometry) facts for kids 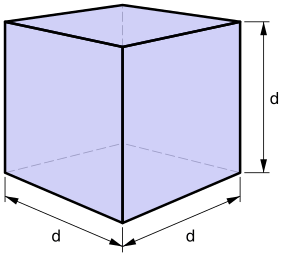 A cube is made of six squares; the square is therefore the base of the cube.

In plane geometry, the base is the side on which a polygon rests on, and which is used as a referenced side for other measurements. The base of a triangle or quadrilateral is often written as

. It is used in the calculation of the area of a triangle and parallelogram.

However, there are also geometric figures that are constructed using different shapes. A pyramid, for example. uses one rectangle and four triangles. In that context, the rectangle is said to be the base of the shape. A cylinder uses a circle or an ellipse as a base.

All content from Kiddle encyclopedia articles (including the article images and facts) can be freely used under Attribution-ShareAlike license, unless stated otherwise. Cite this article:
Base (geometry) Facts for Kids. Kiddle Encyclopedia.