A selection of fresh conkers from a horse chestnut tree

Conkers is a traditional children's game in Great Britain and Ireland played using the seeds of horse chestnut trees—the name 'conker' is also applied to the seed and to the tree itself. The game is played by two players, each with a conker threaded onto a piece of string: they take turns striking each other's conker until one breaks.

The first mention of the game is in Robert Southey's memoirs published in 1821. He describes a similar game, but played with snail shells or hazelnuts. It was only from the 1850s that using horse chestnuts was regularly referred to in certain regions. The game grew in popularity in the 19th century, and spread beyond England.

The first recorded game of Conkers using horse chestnuts was on the Isle of Wight in 1848.

There is uncertainty of the origins of the name. The name may come from the dialect word conker, meaning "knock out" (perhaps related to French conque meaning a conch, as the game was originally played using snail shells and small bits of string.) The name may also be influenced by the verb conquer, as earlier games involving shells and hazelnuts have also been called conquerors. Another possibility is that it is an onomatopoeia, representing the sound made by a horse chestnut as it hits another hard object, such as a skull (another children's "game", also called conkers, consists of simply throwing the seeds at one another over a fence or wall). Conkers are also known regionally as cheesers, a "cheeser" being a conker with one or more flat sides, which comes about due to it sharing its pod with other conkers (twins or triplets). Also Cheggers was used in Lancaster, England in the 1920s. In D. H. Lawrence's book Sons and Lovers, the game is referred to as cobblers by William Morel. 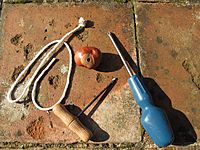 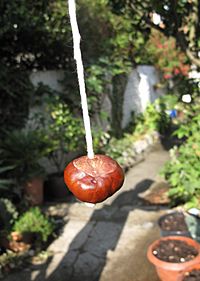 The hardest conkers usually win. Hardening conkers is often done by keeping them for a year (aged conkers are called laggies in many areas or seasoners in Ireland and Liverpool), baking them briefly, soaking or boiling in vinegar, or painting with clear nail varnish. Such hardening is, however, usually regarded as cheating. At the British Junior Conkers Championships on the Isle of Wight in October 2005, contestants were banned from bringing their own conkers due to fears that they might harden them. The Campaign for Real Conkers claimed this was an example of over-regulation which was causing a drop in interest in the game. In both the World Conker Championship and the North American Championship, contestants are also restricted to using the conkers provided by the Organisers.

One factor affecting the strength of a conker is the shape of the hole. A clean cylindrical hole is stronger, as it has no notches or chips that can begin a crack or split.

In 1965 the World Conker Championships were set up in Ashton (near Oundle) Northamptonshire, England, and still take place on the second Sunday of October every year. In 2004, an audience of 5,000 turned up to watch more than 500 competitors from all over the world. The 2016 Championship was featured on the BBC programme "Countryfile".

1976 was the first time that a non-British contestant won the Men's World Conker Championship. The Mexican Jorge Ramirez Carrillo took the place of a contestant who was unable to arrive on time at Ashton, and defeated the 1975 champion at the finals. The Men's champion has been British in every other year except 1998, when Helmut Kern from Nauort, Germany, won.

In 1999 the Irish Conker Championships began in Freshford, County Kilkenny in the Republic of Ireland.

2000 saw the first Ladies' champion from outside the UK. Selma Becker, originally from Austria, took the title. The title of Queen of Conkers has remained in the UK, except in 2001 when Frenchwoman Celine Parachou won.

2001 Eamonn Dooley from Freshford in Co. Kilkenny, Ireland broke the world record by smashing 306 conkers in one hour.

In 2004 an alternative World Conker Championships was first hosted at Pill Harriers Rugby Club, Newport, Wales. This championship, known as the World Annual National Conker Championships, has been held every year since and is sanctioned by Dogfish Promotions. Contestants from America, Italy, England and Wales have taken part.

The North American Conker Championship was inaugurated on 20 October 2012 at the Historic Gardens in the town of Annapolis Royal, Nova Scotia, Canada, hosted by the Annapolis Royal Conker Club.

The 2013 North American Championship was similarly held on the third Saturday, 19 October, and the eventual winner of an all-female Final was Krystyna Schulz of Halifax, NS.

Victor of the 2014 North American Championship was Julian Smith of Yarmouth, NS.

In 2015 the Championship took place on 17 October, once more hosted at the Historic Gardens in Annapolis Royal. The coveted Crofton Chalice was almost regained by Jeff Hafting, the inaugural 2012 Champion, but he lost in the Final to Simon Bonnington of Granville Ferry, NS. This saw the return of the trophy to its home in Annapolis Royal.

2016 saw the Championship won by Elizabeth Mount of Bear River, NS. In the final bout she beat Oliver Bonnington, son of the 2015 Champion.

Remarkably the 2017 final was a re-match of the previous year as Oliver Bonnington once again tried to beat Elizabeth Mount. It was not to be, and Elizabeth became the first North American Champion to retain the Title.

In the 2018 Championship on 13 October, Mount was eliminated in the first round; the eventual Champion that year was Amanda Carson of Kingston, NS, who defeated Rikarda Albright.

Amanda was eliminated in the second round the following year, and the 2019 final saw Spike Sprague of Granville Ferry, NS, pitted against his mother, Georgette Sprague. Georgette, from Petitcodiac, New Brunswick, was the victor when Spike's chestnut shattered on delivering a powerful blow.

Prior to this recent re-emergence, it had been played during the late 1940s and early 1950s in New York in the Flatbush section of Brooklyn, and in the 1950s and early 1960s in the amalgamated section of the Bronx and nearby Mt.Vernon. A winning chestnut was referred to as a "killer" and the value of a chestnut was defined by its number of "kills." It was also played in Queens, the upper West Side of Manhattan, in the Mohawk Valley area of upstate New York and in Westmount, Quebec and other English-speaking parts of Montreal into the 1970s. It was played in the Catholic areas of North Cambridge, MA in the late 1950s, and a winning chestnut was also labeled a "killer". It was being played in the 1960s in Rhode Island. and into the early 1980s in Smithfield, RI. The game was also played in Leicester, Massachusetts in the late 1970s and into the 1980s (and presumably much earlier, given the town's age and predominantly English/Irish settlers) by the children of the Primary School of the town (typically 4th and 5th graders). Leicester's seat of government ("town hall") was a dual use building, serving as both town hall and school. There is a large horse chestnut tree located on the town's common (and adjacent to town hall) that was used as a source for the chestnuts. The Leicester variant on the name for the game was "Horse Cobblers"(presumably a variant of "Horse Conkers").[circular reference]

In 2000 a survey of British schools by Keele University showed that many were not allowing children to play conkers, as head teachers were afraid of the legal consequences if children were injured while playing the game, or because they thought that the conkers might be used as weapons. The TV programme Top Gear later staged a game of conkers using caravans (travel trailers) suspended from cranes. After putting on safety goggles, presenter James May commented "I now feel perfectly happy about being hit in the face by a caravan." Top Gear, along with other media commentators, wrongly stated that the wearing of goggles during the game was due to an official Health and Safety Executive (HSE) edict when it was in fact due to a myth which started when a headmaster bought goggles for children to use as a parody of health and safety regulation and sponsored a Conkers tournament.

In 2004, several schools banned conkers due to fear of causing anaphylactic shock in pupils with nut allergies. Health advisers said that there were no known dangers from conkers for nut-allergy sufferers, although some may experience a mild rash through handling them.

All content from Kiddle encyclopedia articles (including the article images and facts) can be freely used under Attribution-ShareAlike license, unless stated otherwise. Cite this article:
Conkers Facts for Kids. Kiddle Encyclopedia.