Conneaut Lake Park /ˈkɒniˌɔːt/ is a summer resort and amusement park, located in Conneaut Lake, Pennsylvania, United States. It has long served as a regional tourist destination, and is noted by roller coaster enthusiasts for its classic Blue Streak coaster, which was recently classified as "historic" by the American Coaster Enthusiasts group. Conneaut Lake is Pennsylvania's largest natural (glacier) lake and is a popular summer resort for recreational boaters due to there being no horsepower limit on the lake. 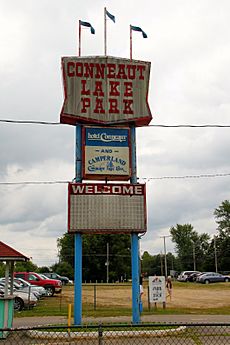 Conneaut Lake Park was founded in 1892 as Exposition Park by Col. Frank Mantor as a permanent fairground and exposition for livestock, machinery, and industrial products from Western Pennsylvania. Prior to this time, 7 acres of land on which the park is located were purchased in 1877 by Aaron Lynce for use as a boat landing. Col. Mantor's company, the Conneaut Lake Exposition Company, purchased an additional 175 acres of adjacent land, 75 of which were given to Mr. Lynce as payment for his parcel.

During its early years, buildings at Exposition Park included a dance hall, a convention hall (for lectures), and a bathhouse. Several of the structures from Lynce's landing were also retained as well as a farmhouse on the property that was converted to a hotel. The park's first mechanical ride, a carousel, opened in 1899, and was soon joined by other rides and a midway. 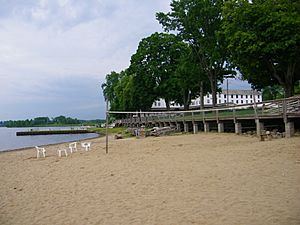 Ownership of the park transferred to the Pittsburgh & Shenango Valley Railroad in 1901, during which time several hotels were built on the property. Originally accessible only by boat or train, trolley service was extended to the park in 1907. With its lakefront presence, hotels, and remote location, the park became a popular resort destination. Although many of the park's original buildings were lost in a 1908 fire, new concrete block replacements were constructed, including the Dreamland Ballroom.

The park was renamed "Conneaut Lake Park" in 1920 to reflect a move toward more amusements and rides. Rides added over these years included a Tumble Bug, bumper car ride, and a Figure Eight roller coaster (later renamed The Jack Rabbit). In 1938, the park's signature roller coaster, The Blue Streak, was added. 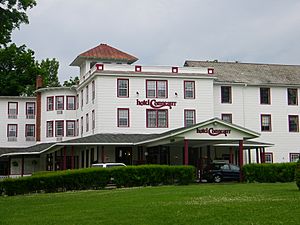 In 1943, a large portion of the Hotel Conneaut was destroyed in a fire. The ghost of Elizabeth, a bride who supposedly died in the fire, is said to now haunt the hotel.

Facing competition from corporate-owned theme parks, the park added a jungle cruise ride and other new attractions in the 1960s. As trolley service had been discontinued, the park's management began to focus on directing automobile traffic to the park. "Fairyland Forest," a walk-through attraction, was constructed across the highway from the park's main entrance. Using a combination of fairy tale characters and animals to help attract families and appeal to young children, many similar attractions existed across the country at that time. Although popular, the area eventually fell into neglect and closed in 1985 and was replaced with Camperland in 1986.

By the 1990s, a series of ownership changes had taken their toll on the park. A 1974 takeover of the park by Dr. John and Mary Gene Winslow Flynn had saddled the park with $750,000 in debt and expansion slowed. Charles Flynn, long-time associate of New York City mayor Ed Koch and son of Dr. John and Mary Gene decided to leave politics and become actively involved in the family business. Initially this change in management was able to invigorate the park. In the early 1980s, rides such as the Paratrooper and Yo-Yo were added. The waterfront was improved. Along the park's midway, a waterslide tower was added and proved popular. 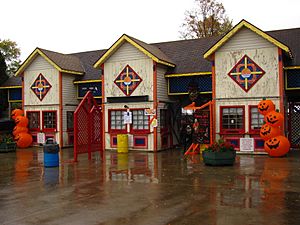 For most of its history, Conneaut Lake Park functioned as a real-life community within an amusement park, as local traffic and waterfront cottages were interspersed with the amusement rides. Park Avenue and Comstock Street, the park's main walking paths, were shared by both patrons and vehicles alike. Although bothersome at times, locals were proud of this arrangement's unique appeal. In an effort to remain competitive, the decision was made to enclose the park for the 1990 season. For the first time in its long history, admission would be charged. In a letter to customers explaining the changes, Flynn stated, "Traditional parks are dropping like flies and it's time we all realize that we have to take steps now and save our park before its too late to do anything about it." 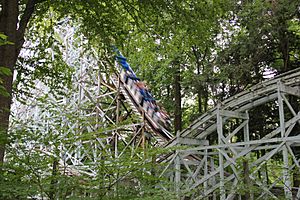 The new gated park format, coupled with a rainy summer, led to a decline in attendance. In an effort to raise capital, several rides were sold off. After another disastrous season, a decision was announced: the park, with the exception of the water park, would be leveled and a new family entertainment complex would be built on the property. The new family entertainment complex would focus on special events, concerts, group picnics, and non-ride activities, such as batting cages, mazes, and sports activities. The Blue Streak rollercoaster, which required an estimated $100,000 in repairs, would be scrapped.

As the park's rides were auctioned off, a group of four local businessmen made a concerted effort to purchase as many of them as possible. This group went on to purchase the park from the Flynn family in an attempt to preserve it as a traditional amusement park. Although nearly $1 million was spent in upgrading and refurbishing the park, attendance continued to dwindle, in part due to a public perception that the park had closed altogether.

In 1995, the owners filed for bankruptcy and the park did not open. However, by the 1996 season, a group called Summer Resorts, Inc., under the leadership of Gary Harris, completed a purchase of the park. Although Harris arrived at Conneaut Lake with a history of criminal charges, residents were optimistic that the park could be saved under his leadership. The park reopened on July 4, 1996, but new problems arose in 1997 when Harris was convicted of tax evasion. To help extricate himself from his legal difficulties, Harris gave the debt-ridden park to the Conneaut Lake community in 1997, but later filed a lawsuit claiming that he held a 99–year lease on the park grounds and retained ownership of several rides. When that lawsuit was lost in 2001, ownership reverted to a court-appointed trustee.

The park began the new century under the oversight of a not-for-profit corporation, The Trustees of Conneaut Lake Park. During this time, the park experienced a renewed interest, driven in part by roller coaster and amusement park enthusiast groups. Several of the park's rides, including the Devil's Den and Blue Streak Roller Coaster, were repaired by volunteers. In August 2010, the park received $50,000 in funds from a contest sponsored by Pepsi for use in restoring the Blue Streak. 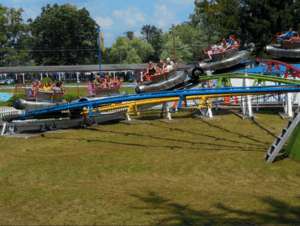 The park's Historic Tumble Bug ride, the older of only two in the world. 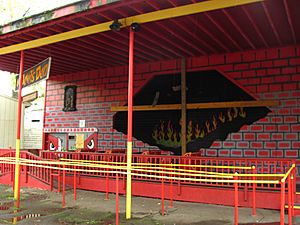 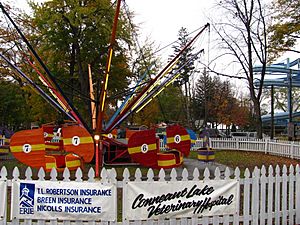 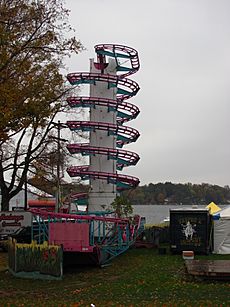 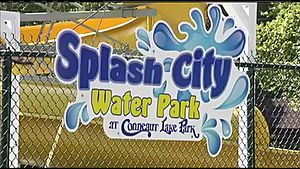 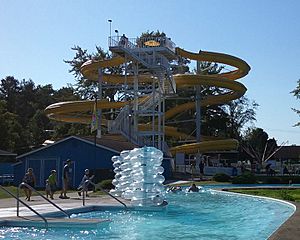 Splash City is a water park located in the middle of the park. It contains 3 major attractions; Cliffhanger Falls, Connie Otter's Kiddie Cove, and Otter Creek River Adventure. There are also two decks on the island of the lazy river for sunbathing. They can be accessed by a bridge on the right end of the lazy river. The slides were added in 1986, and the rest of the water park was added in 1991. They operated from 1986-1994, 1996-2006, and then again from 2009-2010. It sat idle between 2011 and 2016. In October 2015, the park announced Splash City would be reopening in 2016. On May 28, 2016, Otter Creek River Adventure reopened to the public. On August 6, 2016, both Cliffhanger Falls and Connie Otter's Kiddie Cove reopened to the public after sitting idle for six years.

Otter Creek Adventure River : A 160,000 gallon lazy river ride, with other water effects such as a mushroom and waterfall.

Cliffhanger Falls : A pair of two 415-foot-long water slides. To get to the top, riders climb several sets of stairs, up a 48-foot-tall tower.

Connie Otter's Kiddie Cove : A children's splash pool, with 3 attractions. These include a small water slide in one corner, a waterfall with a walkway behind it in another corner, and a fountain in the center of the pool. It is located directly behind Cliffhanger Falls. 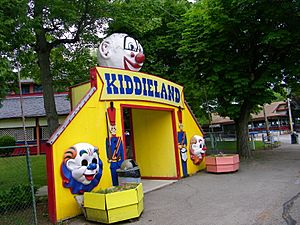 Kiddieland is a small enclosed section of the park containing 13 rides specifically for children. It is located behind the Carousel and across from the Witch's Stew and Trabant. It can be accessed from either between the carousel and Blue Streak, or the main entrance across from the Witch's Stew. The original Kiddieland restrooms were destroyed by a fire in 2010. They have since been rebuilt, albeit a different design.

The following rides are in Kiddieland:

The Kiddieland section of the park also offers Pony Rides. This is a large natural grass oval track, not found at many amusement parks anymore. Recently the man who managed the pony track retired after 60+ years. However the pony track continues to operate for a nominal fee.

All content from Kiddle encyclopedia articles (including the article images and facts) can be freely used under Attribution-ShareAlike license, unless stated otherwise. Cite this article:
Conneaut Lake Park Facts for Kids. Kiddle Encyclopedia.