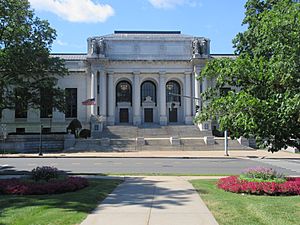 The State Library Board consists of:

The terms of appointed members are coterminous with the term of their appointing authority. The State Librarian, who serves as the chief administrative officer of the Board, is appointed by the Board.

Section 11-1 of the Connecticut General Statutes assigns to the Board the responsibility for:

The State Library Board approves rules and regulations for the state publication depository library system; the retention, destruction, and transfer of documents; the "borrowIT CT" (formerly known as Connecticard) program; and statewide library programs.

The Division of Library Development administers many programs to support public libraries in the state:

The Museum of Connecticut History consists of Memorial Hall, a magnificently restored Beaux-Arts style gallery, and three adjoining exhibit areas. On permanent display are portraits of Connecticut Governors as well as historical documents, including the State's original 1662 Royal Charter, the 1639 Fundamental Orders, and the 1818 and 1964 State Constitutions. The focus of the Museum and its collections is Connecticut's government, military, and industrial history. 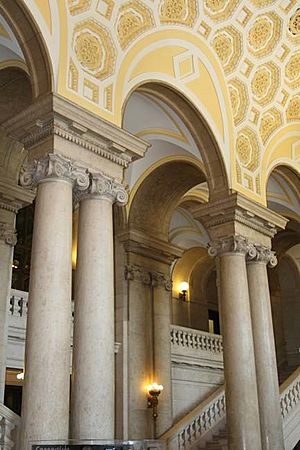 The groundbreaking ceremony for the Connecticut State Library and Supreme Court Building was held on July 29, 1908. Architects Donn Barber of New York and E. T. Hapgood of Hartford envisioned a design based on an adaptation of the Italian Renaissance style of architecture. The design includes three wings off a central lobby, the State Library on the left, Memorial Hall in the center and the Supreme Court on the right. Construction began on October 23, 1908, with Marc Eidlitz & Son of New York as the builder and general contractor. On November 28, 1910, State Librarian George Godard and his staff moved into the new building.

An addition to the East Wing in 1969 was designed by Architects Jeter & Cook. Bartlett-Brainard & Eacott, Inc. was the general contractor. The addition featured Museum exhibition space, an extensive stack area, and administrative office space.

The library building was listed on the National Register of Historic Places in 1981, recognizing both its architecture and its significance as a repository of state history.

All content from Kiddle encyclopedia articles (including the article images and facts) can be freely used under Attribution-ShareAlike license, unless stated otherwise. Cite this article:
Connecticut State Library Facts for Kids. Kiddle Encyclopedia.