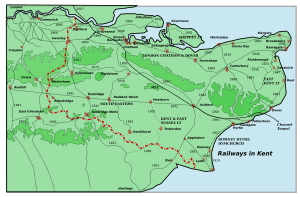 The railway lines of Kent, many of which Connex South Eastern ran services on

Connex South Eastern was a train operating company in the United Kingdom. It was owned by Connex. It operated the South Eastern Passenger Rail Franchise from October 1996 until November 2003.

Its services were stopped because of money problems and using old trains instead of buying new ones.

All content from Kiddle encyclopedia articles (including the article images and facts) can be freely used under Attribution-ShareAlike license, unless stated otherwise. Cite this article:
Connex South Eastern Facts for Kids. Kiddle Encyclopedia.