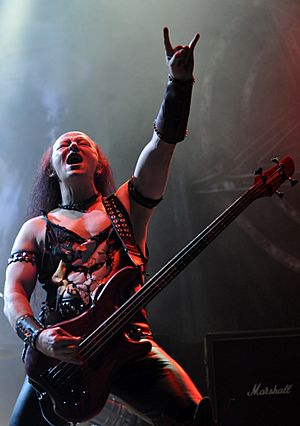 Conrad "Cronos" Lant (born 15 January 1963) is the vocalist and bass player in black metal band Venom. He was born in 1963 in London, England.

Cronos started to sing in 1978 in the band Guillotine. Then he knew Jeffrey "Mantas" Dunn and they founded Venom.

In 1989 Cronos left the band to start a solo work. Venom could not go on without him and they stopped singing in 1993. Then Cronos returned in 1995 and rejoined the band.

All content from Kiddle encyclopedia articles (including the article images and facts) can be freely used under Attribution-ShareAlike license, unless stated otherwise. Cite this article:
Conrad Lant Facts for Kids. Kiddle Encyclopedia.