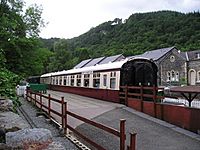 The museum was founded in the early 1970s by Alan Pratt, starting with a former standard gauge railway carriage which today acts as a licensed buffet and restaurant car. The current museum was built later, and contains various railway artefacts, including a 15 in (381 mm) gauge quarter scale (1:4) replica of a Britannia class locomotive.

There is also a one-third full-size (1:3) electric tramcar which runs for a 0.5-mile (805 m) on the site, on track of 15 in (381 mm) gauge. This is one of only two electric tramways in Wales (the other being a short 18 in (457 mm) gauge electric tramway in Heath Park, Cardiff, owned by Cardiff Model Engineering Society).

All content from Kiddle encyclopedia articles (including the article images and facts) can be freely used under Attribution-ShareAlike license, unless stated otherwise. Cite this article:
Conwy Valley Railway Museum Facts for Kids. Kiddle Encyclopedia.