Cooperia was a genus of tender herbaceous perennials native to South America and the southern reaches of North America. They were closely related to Zephyranthes and Habranthus, all of which are members of the amaryllis family, Amaryllidaceae. All three genera were commonly known as rain lilies because of their propensity for blooming after rains. Cooperia blooms in summer and fall.

Although Cooperia was considered distinguishable from the better known rain lily genus, Zephyranthes, by its fragrance similar to primroses, its white or yellow pollen, its tolerance for drout and desert conditions (Howard 2001:54) and tendency to be night-blooming (Ogden 1994:11), it is now considered to be part of Zephyranthes and the genus name Cooperia is no longer accepted. 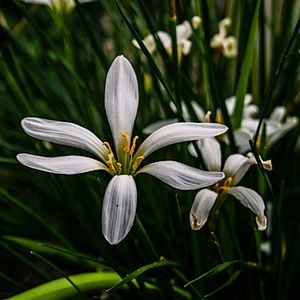 Cross-generic hybrids have been successfully created with both Zephyranthes (× Cooperanthes) and Habranthus (× Cooperanthus) (Ogden 1994:11, Howard 2001:54).

All content from Kiddle encyclopedia articles (including the article images and facts) can be freely used under Attribution-ShareAlike license, unless stated otherwise. Cite this article:
Cooperia (plant) Facts for Kids. Kiddle Encyclopedia.