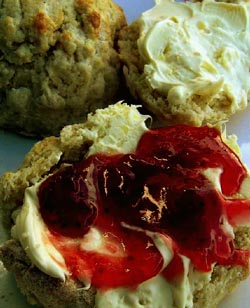 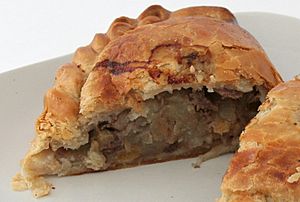 Cornish cookery denotes the cooking styles, traditions and recipes associated with Cornwall. It has been heavily influenced by the geography of the county as well as its social history.

Being a peninsula, fish dishes form a major part of the historical and modern recipes in Cornwall, with the fishing industry playing a major part in its economy. The iconic dish of Cornwall, the pasty, has its roots in the mining industry.

Cornwall's cookery has influenced and been influenced by other British cuisine, as well as having similarities with the cuisine of its neighbour, Devon.

Much of Cornwall's farming land is suitable for milk production and one of the by products is clotted cream (cream thickened by cooking). This forms the basis for many local specialities including Cornish fudge and Cornish ice cream and is used in Cornish cream teas. Cornish clotted cream is protected under EU law, and cannot be made anywhere else.

Cornwall is perhaps best known for its pasties, a savoury baked dish made from pastry. Today's pasties usually contain a filling of beef steak, onion, potato and swede with salt and white pepper, but historically pasties had a variety of different fillings. Pasties are often locally referred to as oggies.

All content from Kiddle encyclopedia articles (including the article images and facts) can be freely used under Attribution-ShareAlike license, unless stated otherwise. Cite this article:
Cornish cookery Facts for Kids. Kiddle Encyclopedia.