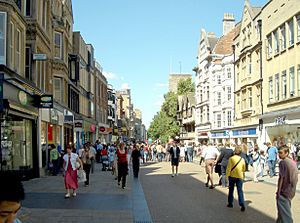 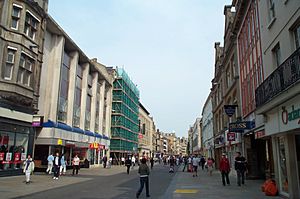 Cornmarket seen from the south, 2004; notice the newly installed benches of unusual shape. 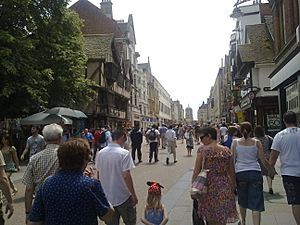 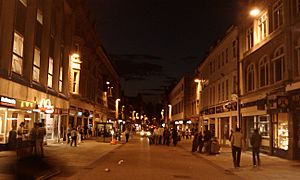 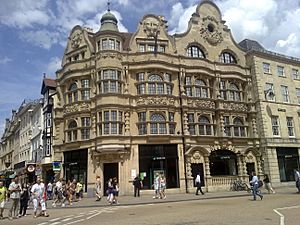 The Lloyds Bank building on the corner of Cornmarket (left) and the High Street (right).

Cornmarket Street (often called just Cornmarket or historically The Corn by Oxonians) is a major shopping street and pedestrian precinct in Oxford, England that runs north-south between Carfax Tower and Magdalen Street.

To the east is the small Golden Cross arcade of small jewellery and craft shops in a historic courtyard, leading to the Covered Market. To the west is the indoor Clarendon Shopping Centre that connects in an L-shape to Queen Street.

Cornmarket was pedestrianised in 1999. In 2002, it was voted Britain's second worst street in a poll of listeners to the Today programme. The rating was due largely to the first attempt to repave the street in 2001. This work was a failure as the granite setts, which had been laid extensively, cracked and the contractor went into liquidation. In 2003 it was repaved again and new benches installed, amidst reports of budgetary problems.

26–28 Cornmarket on the corner of Ship Street is a 14th-century timber-framed building. It is the surviving half of a building completed in about 1386 as the New Inn. It belongs to Jesus College and was investigated and restored in 1983.

The Victorian photographer Henry Taunt set up a shop at 33 Cornmarket Street in 1869. It was a small shop and in 1874 he moved to larger premises in Broad Street.

Woolworth's bought the historic Clarendon Hotel on the west side of the street in 1939 to demolish it and build a new store on the site. Thomas Sharp, in his report Oxford Replanned for Oxford City Council, warned that Oxford was already short of quality hotel accommodation and the Clarendon's demolition would be a mistake. Notwithstanding Sharp's advice, Woolworth's demolished the hotel in 1954–55. In earlier centuries the Clarendon had been the Star Inn. It was a complex of 16th- and 17th-century buildings, one of which had a vaulted Norman cellar dating from the second half of the 12th century: possibly the oldest vaulted structure in Oxford. After demolition of all the buildings above the surface, parts of the 12th-century vault were destroyed to make way for one of the columns of Clarendon House built in its place.

Clarendon House was designed by William Holford and built in 1956–57. The façade is of coursed and squared rubble masonry with panels of blue-green slate, and Nikolaus Pevsner commended the building as tactful and elegant. The building is now part of the Clarendon Shopping Centre.

St Michael at the Northgate 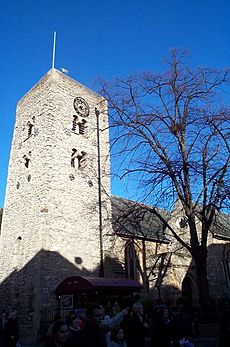 The Saxon tower of St Michael at the Northgate in Cornmarket Street.

The tower of the Church of England parish church of St Michael at the Northgate is the oldest building in Oxford. It is Saxon and dates from about 1000–1050. The church is named after the medieval gate of Oxford's city walls that spanned the north end of Cornmarket.

Near this church was the Bocardo Prison, where the Oxford Martyrs were imprisoned in 1555–56 before being burnt at the stake outside the town wall in what is now Broad Street nearby.

All content from Kiddle encyclopedia articles (including the article images and facts) can be freely used under Attribution-ShareAlike license, unless stated otherwise. Cite this article:
Cornmarket Street Facts for Kids. Kiddle Encyclopedia.