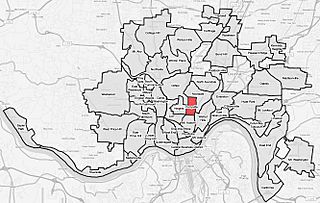 Corryville is a neighborhood of Cincinnati, Ohio. 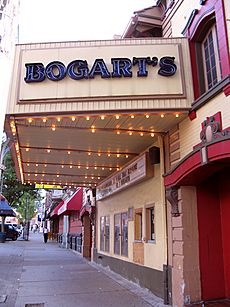 Bogarts in Corryville is a popular local music venue.

Corryville is a neighborhood in Cincinnati, Ohio, east of the University of Cincinnati, southeast of Clifton, south and west of Avondale, northwest of Walnut Hills, and north of Mount Auburn.

The original owners of part of the land were Jacob Burnet and William McMillan. The neighborhood's namesake, William Corry, was an early mayor of Cincinnati and himself a prominent landowner in the Corryville area. German Americans largely settled the village of Corryville, moving north up the hillside from the congested Over-the-Rhine basin. Corryville was annexed to the City of Cincinnati in 1870.

Corryville is well known for Short Vine Street, which contains several small shops, restaurants, bars, and the music venue Bogart's. Mecklenburg's Garden, a German restaurant founded in the 1800s, is listed on the National Register of Historic Places; it has operated since at least 1870.

Over the past several years, Corryville has continued to shift its demographics, economics, and appearance. Many new homes, apartment buildings, condominiums, and shops and restaurants have been constructed. The neighborhood has increasingly shifted to younger residents who are affiliated with the University of Cincinnati, Cincinnati Children's Hospital, and University Hospital. Short Vine is currently being renovated with new sidewalks, new asphalt, and many storefronts have been or are being renovated.

Consequently, property values in the area have increased year-over-year since 2005, causing renewed interest in economic investment in the area while furthering the demographic shift of the area. According to Realtor.com, the average home price in Corryville is $232,812 compared with $174,900 for Cincinnati. Additionally, the average cost per square foot is $176 compared with $71 for Cincinnati.

All content from Kiddle encyclopedia articles (including the article images and facts) can be freely used under Attribution-ShareAlike license, unless stated otherwise. Cite this article:
Corryville, Cincinnati Facts for Kids. Kiddle Encyclopedia.