Corson is an unincorporated community in Brandon Township, Minnehaha County, South Dakota, United States with a population of 70. It lies immediately north of Interstate 90 and Brandon on South Dakota Highway 11. Once mainly a railroad and farming community, it is becoming an industrial area supporting the county. Sioux Falls is located twelve miles west-southwest of the community. It is served by the BNSF Railway Company.

Corson is named for Henry Tabor Corson, a railroad official instrumental in constructing the Wilmar and Saint Paul Railroad into Sioux Falls. (SD-T17/p57) 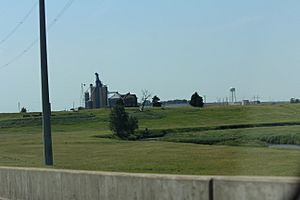 Interstate 90 is the town's major east–west route, and it connects the community to Sioux Falls. South Dakota Highway 11 (SD 11) runs as the major north–south route through the area. SD 11 connects Corson to nearby Brandon and Garretson.

Corson is locally famous for two major attractions: The Playhouse, which is a small theater, and Bottoms Up, a bar. Both are conveniently located next to one another.

All content from Kiddle encyclopedia articles (including the article images and facts) can be freely used under Attribution-ShareAlike license, unless stated otherwise. Cite this article:
Corson, South Dakota Facts for Kids. Kiddle Encyclopedia.