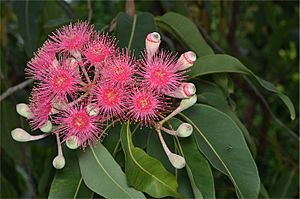 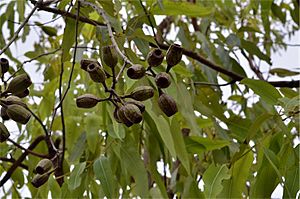 Corymbia ptychocarpa, commonly known as the swamp bloodwood or spring bloodwood, is a species of tree that is endemic to northwestern Australia. It has rough bark on the trunk and branches, broadly lance-shaped adult leaves, flower buds in groups of seven, creamy yellow, pink or red flowers, and barrel-shaped, ribbed fruit.

Swamp bloodwood was first formally described in 1859 by Ferdinand von Mueller who gave it the name Eucalyptus ptychocarpa and published the description in the Journal of the Proceedings of the Linnean Society, Botany. In 1995 Ken Hill and Lawrence Alexander Sidney Johnson changed the name to Corymbia ptychocarpa.

In the same paper, Hill and Johnson described two subspecies and the names are accepted by the Australian Plant Census:

Corymbia ptychocarpa is found from the Kimberley region of Western Australia and through the Top End of the Northern Territory to near Doomadgee in far north-western Queensland. It grows in sandy soils and alluvium along watercourses and near springs. In the Northern Territory it occurs on the Arnhem Plateau, Daly Basin, Ord Victoria Plain, Pine Creek and the Victoria Bonaparte biogeographic regions.

Subspecies aptycha is restricted to the Top End between the Cobourg Peninsula, Yirrkala amd El Sharana in Arnhem Land.

It is also grown as a street tree in parts of Queensland such as Cairns and Townsville.

All content from Kiddle encyclopedia articles (including the article images and facts) can be freely used under Attribution-ShareAlike license, unless stated otherwise. Cite this article:
Corymbia ptychocarpa Facts for Kids. Kiddle Encyclopedia.