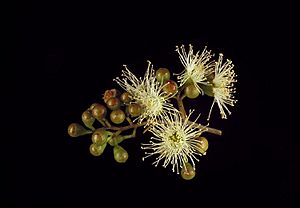 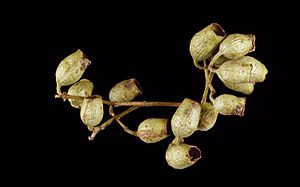 Corymbia tessellaris, commonly known as carbeen or Moreton Bay ash, is a species of tree that is endemic to north-eastern Australia. It has rough, tessellated bark on the lower trunk abruptly changing to smooth, whitish bark above, narrow lance-shaped adult leaves, flower buds in groups of three or seven, white flowers and cylindrical or urn-shaped fruit

Carbeen was first formally described in 1859 by Ferdinand von Mueller who gave it the name Eucalyptus tessellaris in Journal of the Proceedings of the Linnean Society, Botany. In 1995, Ken Hill and Lawrie Johnson changed the name to Corymbia tessellaris, publishing the change in the journal Telopea.

Corymbia tessellaris is widespread in north-eastern Australia where it grows in undulating open forest and woodland. It is found from Cape York Peninsula and south through eastern Queensland to near Narrabri and Kyogle in northern New South Wales. It also occurs on some Torres Strait Islands and in southern New Guinea.

Yirrganydji and Djabugay people use medicine made from the tree to treat wounds and conditions such as dysentery and use the wood to make tools.

Carbeen is resistant to strong winds, heat and drought and can be propagated from seed.

The wood is heavy and has been used for bridge construction and making spears. The tree produces many organic compounds with industrial potential including pinenes, aromadendrene, limonene and globulol.

All content from Kiddle encyclopedia articles (including the article images and facts) can be freely used under Attribution-ShareAlike license, unless stated otherwise. Cite this article:
Carbeen Facts for Kids. Kiddle Encyclopedia.