Cottage Grove is a community in Houston, Texas.

Around 2005 many young professionals and empty nesters began settling in Cottage Grove. Earvin Smith, the civic club president, said that the resulting increase in taxes are forcing senior citizens with fixed incomes to leave the neighborhood.

Around 2011 the company Houston InTown Homes planned to build new houses in the community. The first phase, consisting of 230 houses, would enlarge Cottage Grove by one third.

Mary-Jane Buschlen, a resident of Cottage Grove quoted in the Houston Chronicle said that there were no new townhouses being built in Cottage Grove in 1995. She also said that flooding had never occurred before the early 1990s. As of 2005 the neighborhood had not yet been completely built out, contrasting with other area neighborhoods. Due to an increase in demand, around that year, developers began building new houses in Cottage Grove. The new housing styles included patio houses and townhouses. In a two-year period ending in May 2005, land prices increased from $9 ($10.42 in current money) per square foot to $20 ($21.83 in current money) per square foot. This would be an increase in $100,000 for a 5,000-square-foot (460 m2) lot. In 2005 some houses were priced up to $280,000 ($305567.72 in current money).

By 2009 many large townhouses had been built in the community. Many lots that previously held one cottage began holding multiple townhouses. During that year Snyder said that car owners heavy rains in the neighborhood result in standing water and many cars are parked on the sides of the street in both directions. In 2007, Tom Murphy, a former Mayor of Pittsburgh and a senior fellow of the Urban Land Institute, visited Cottage Grove. After seeing the large houses in crowded conditions, Murphy said "It was shocking to see this jewel of a neighborhood in this condition. It was about the ugliest thing I’d ever seen, to be honest with you.” In 2011, Jerry Wood, an independent consultant advising the City of Houston on issues related to the U.S. Census and a former City of Houston deputy assistant of planning and development, said "In Cottage Grove, three-and four-story townhouses are replacing bungalows at a high rate" Buschlen said in 2011 that about 70% of the houses on her street were newly built. She argued that the development had occurred faster than the infrastructure could handle, and that the development should have been better planned; she explained that new development caused many of the trees in the neighborhood to be destroyed, and flooding occurred regularly. 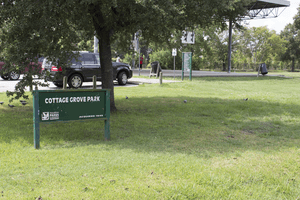 Cottage Grove Park is in Cottage Grove. It has a full covered basketball court, a 60-foot (18 m) baseball field, a playground, and paved parking. On September 1, 2010 the Houston City Council voted to approve a Chapter 380 agreement, a program authorized by the State of Texas to allow a municipal government to give house developers an incentive to increase economic development. As a result, a developer has planned to build a hike and bike trail along a railroad spur. In addition, Cottage Grove residents had lobbied to extend an existing hike and bike trail from Shepherd Drive to Hempstead Road.

All content from Kiddle encyclopedia articles (including the article images and facts) can be freely used under Attribution-ShareAlike license, unless stated otherwise. Cite this article:
Cottage Grove, Houston Facts for Kids. Kiddle Encyclopedia.