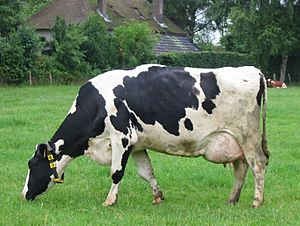 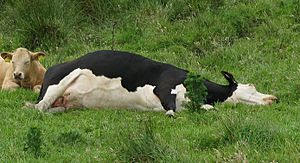 An Holstein cow lying on its side

Cow tipping is the supposed rural activity of sneaking up on an upright sleeping cow and pushing it over for amusement. Some variants of this urban legend state that the cow is then unable to get up. The appeal of this myth derives from the belief that cows are slow-witted and top-heavy, and the assumption that relatively little force would need to be applied to tip them over.

Evidence that cow tipping is an urban myth

There is no evidence aside from (mostly unreliable) eyewitness reports that any cows have ever been tipped in this manner. In addition, there are a number of problems with typical accounts of cow tipping. Unlike horses, cows do not 'lock their legs' when they sleep. Most of their sleep is very light and easily disturbed - typical of herd prey animals.

They take short naps at regular intervals throughout a 24 hour period, which means that at any given time, some members of the herd are aware and alert. The vision field of a cow is larger than that of a human, and they have acute senses of hearing and smell. Cows are not easy to sneak up on, and quickly communicate to the rest of the herd that something is amiss.

Cows are large, and would be a challenge even for several people to tip over. A grown cow can be over 5 feet high with a mass of on the order of 700 kg (1,500 pounds) and sometimes reaching 900kg. By way of comparison, a typical sumo wrestler masses only 140 kg (310 lb). The four corners of a large "American-style" domestic refrigerator fairly closely approximate the spread of a cow's legs. If the refrigerator were cut down to five feet, filled with 400kg of lead weights, and placed in a muddy field, tipping it would offer a comparable challenge to tipping a cow.

Finally, attempting to tip a cow is a patently dangerous activity. Despite the animal's reputation for being placid and slow-moving, a cow is easily capable of hurting someone when provoked or nervous; a herd of cows or a bull (not always easily distinguished in the dark) would be even more dangerous.

All content from Kiddle encyclopedia articles (including the article images and facts) can be freely used under Attribution-ShareAlike license, unless stated otherwise. Cite this article:
Cow tipping Facts for Kids. Kiddle Encyclopedia.