It is called the barking frog because its call sounds like the barking of a small dog, although vocalizations vary by area. It is an abundant species in Mexico but apparently rare in the United States. However, they are very difficult to detect unless they are calling, which only occurs during few nights after rains. 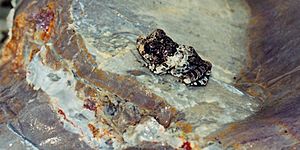 Adult Craugastor augusti measure 47–94 mm (1.9–3.7 in). They have a characteristic fold of skin across the back of the head as well as well-developed tubercles on their feet. Colouration is sexually dimorphic.

The natural habitats of Craugastor augusti are shrublands and deserts. It is a terrestrial frog that hides under rocks, in caves, or crevices. Eggs are laid in similar microhabitats and develop directly to small froglets, without freeliving tadpole stage. They are known to live for up to seven years in the wild, at least, and 11 years in captivity.

All content from Kiddle encyclopedia articles (including the article images and facts) can be freely used under Attribution-ShareAlike license, unless stated otherwise. Cite this article:
Craugastor augusti Facts for Kids. Kiddle Encyclopedia.