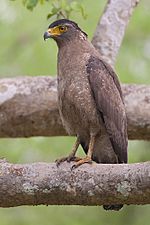 All members within the species complex have a large looking head with long feathers on the back of the head giving them a crested appearance. The face is bare and yellow joining up with the beak. Its powerful feet are unfeathered and heavily scaled. They fly over the forest canopy on broad wings and their tails have wide white and black bars. They call often with a loud, piercing and familiar three or two-note call.

This raptor sits motionless from a high perch watching for prey. When prey is found it drops almost straight down to pounce. They often feed on snakes, giving them their name and are placed along with the Circaetus snake-eagles in the subfamily Circaetinae. In addition to snakes it catches reptiles as well as small mammals and birds. It will take a dead snake whenever it finds one. They are often seen soaring over their territory in pairs. In Japan they are usually found very close to forest edges and wet marshlands.

Role in the ecosystem

Crested serpent eagles are apex predators and at the top of their food chain. They are a good indicator of the health of the ecosystem they occupy. They control snake populations and also those of other small mammals and reptiles. They are a common sight in places such as India. The species is not globally threatened. On most lists they are of least concern.

All content from Kiddle encyclopedia articles (including the article images and facts) can be freely used under Attribution-ShareAlike license, unless stated otherwise. Cite this article:
Crested serpent eagle Facts for Kids. Kiddle Encyclopedia.